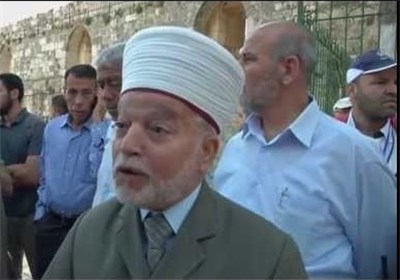 TEHRAN (Tasnim) – Mufti of al-Quds (Jerusalem) Mohammed Hussein said at a time there are threats of military action against Syria and as the crisis in that country has cast a pall over the region, the Israeli regime is forging ahead with the Judaization of East al-Quds.

Speaking to Tasnim on Monday, the Palestinian Mufti talked of Israel’s schemes to change the demography of East al-Quds as Syria has descended into a prolonged civil war and some western countries are threatening to strike it in the wake of a chemical weapons attack on August 21.

“While there are threats of military action against Syria, and Islamic and Arab countries are busy with the current developments, it is natural that the Zionist regime should take advantage of the opprtunity and push ahead with its policies and activities so that in can put the Palestinian people in a fait accompli,” Muhammed Hussein said.

The US had threatened military action against the Syrian government in the wake of a chemical weapons attack in the suburbs of Damascus on August 21 which it blamed on forces loyal to Syrian President bashar al-Assad, a charge strongly denied by the government.

But the Obama administration, failing to win widespread support for intervention in Syria abroad and at home, opted to work on a diplomatic solution with Russia, a key Syrian ally, which had proposed putting Syria’s chemical weapons stockpile under control of the international community for its eventual decommissioning.

The Palestinian Mufti went on to say that all plots hatched by the West and enemies of Islam are aimed at serving Israel’s interests, and added, “Westerners and enemies of the Islamic Ummah have done their utmost to help the occupying Zionist regime put down its roots in the Palestinian territories.”

He further called on all Muslim people to unite against the enemies, saying all the threats facing the Muslim world stem from the rifts and divisions among the Islamic states, which are then employed by the enemies to pursue their policies and plots.

Settler numbers in lands occupied in 1967 have more than doubled since Israel and the Palestinians first started the so-called peace talks under the Oslo Accords of 1993 to over half a million. Israel has kept control of more than 60 percent of the occupied West Bank and around 80 percent of Palestinian water resources.