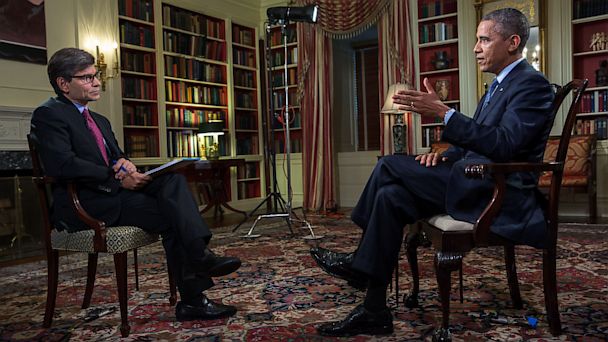 WASHINGTON — President Obama says a tumultuous month as commander in chief, when his policy toward Syria took a number of unexpected turns, may not have looked “smooth and disciplined and linear,” but it’s working.

“I’m less concerned about style points. I’m much more concerned with getting the policy right,” Obama told ABC’s George Stephanopoulos in an exclusive interview on “This Week.”

Obama said his surprise announcement on Aug. 31 that he would seek congressional authorization for U.S. military strikes against Syria, then the abrupt cancellation of a vote this week and pursuit of a diplomatic plan led by the Russians, has put the country “definitely in a better position.”

“My entire goal throughout this exercise is to make sure what happened on Aug. 21 does not happen again,” the president told Stephanopoulos of the large-scale chemical weapons attack outside Damascus that he said killed more than 1,400 civilians.

“We have the possibility of making sure it doesn’t happen again,” he said.

Critics of the president on both the left and the right have accused him of a meandering response to Syria’s bloody ongoing civil war and a failure to effectively communicate to the American people a compelling case for action.

In the latest diplomatic turn, some say Obama is being outmaneuvered, even insulted, by Russian President Vladimir Putin, whose New York Times op-ed this week rebuked “American exceptionalism.”

Obama argued on “This Week” that the choices he’s made — including a renewed partnership with Putin — have already created a desired deterrent effect, making it less likely the Syrian government will again use chemical weapons in the short term.

The president said a “verifiable agreement” to disarm Assad of his chemical stockpiles will go further than any U.S. military strikes could have in eliminating the threat of their use.

“If that goal is achieved, then it sounds to me like we did something right,” Obama said.

On Saturday, the U.S. and Russia announced a plan to transfer Syria’s chemical weapons stockpile to international control by the middle of next year for destruction, with Syria given one week to declare the size and location of its chemical weapons stashes before outside inspectors arrive in November.

But it’s still unclear how inspectors will be able to remove and destroy the weapons in the middle of an ongoing civil war, and whether Assad will go along. Another open question is whether the Russians will facilitate enforcement of an agreement.

Obama said he is optimistic but cautious that Putin will be a reliable partner.

“I don’t think that Mr. Putin has the same values that we do,” Obama said in response to Putin’s controversial op-ed.

“I welcome him being involved. I welcome him saying, ‘I will take responsibility for pushing my client, the Assad regime, to deal with these chemical weapons,’” he said. “This is not the Cold War. This is not a contest between the United States and Russia.”

If Russia wants influence in Syria, Obama added, “that doesn’t hurt our interests.”

The president suggested that he even sees a potential role for Iran in helping to stabilize Syria, despite reports that Iranian fighters have been streaming into the country to support the Assad regime.

Obama confirmed publicly for the first time on “This Week” that he has exchanged letters with new Iranian president Hassan Rouhani, who has vowed to act forcefully to prevent any Western military intervention in Syria, using “all efforts to prevent it.”

Obama said he believes his threat to use U.S. military force in Syria, and subsequent pause to pursue diplomacy, sends a signal to the Iranian regime in the ongoing dispute over its contested nuclear program.

“What they should draw from this lesson is that there is the potential of resolving these issues diplomatically,” Obama said.

“I think this new president is not going to suddenly make it easy,” he added. “But you know, my view is that if you have both a credible threat of force, combined with a rigorous diplomatic effort, that, in fact … you can strike a deal.”