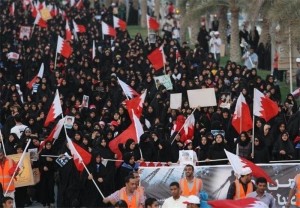 People in Bahrain have held yet another demonstration to protest the killing of a young opposition activist by Saudi-backed regime forces.

The protesters chanted anti-regime slogans during the rally in the village of Nouedrat on Saturday.

The rally was held in protest at the killing of Mohammed Abdul Jalil Yousif on Wednesday at the hands of the regime forces. Activists say Yousif was run over by a vehicle belonging to the security forces.

On Friday, several protesters were arrested in the north of Bahrain after Yousif’s mass funeral turned into a rally.

The situation has been volatile in the Persian Gulf country since anti-regime protests began in 2011.

Bahrainis primarily demanded political reform and a constitutional monarchy, a demand that later changed to an outright call for the ouster of the ruling Al Khalifa family following its brutal crackdown on popular protests.

Scores of people have been killed, many of them under torture while in custody, and thousands more detained since the popular uprising in Bahrain began.

Protesters say they will continue holding anti-regime demonstrations until their demand for the establishment of a democratically-elected government and an end to rights violations are met.