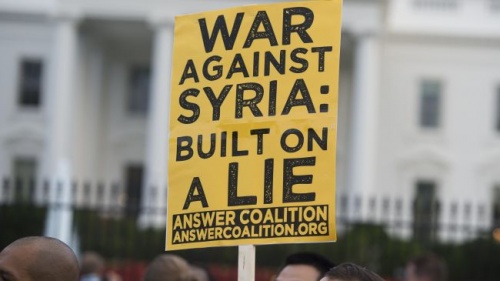 The other super power is winning

The world’s people are protesting. US citizens abroad are protesting at US embassies. The British Parliament said no to war for the first time since Yorktown.

The US polls began with single-digit support for attacking Syria, climbed a little with the corporate media onslaught, and then started sinking again as the propaganda push shifted into self-defeating top gear.

Taking the stage after Colin Powell, the Obama-Kerry war marketing team was compelled by public pressure, foreign pressure, government-insider pressure, past public statements, and the inability of even the corporate media to keep a straight face, to take this war proposal to Congress — and to do so while Congress members and senators were at home in their districts and states, where people were able to get in their faces.

Congress has been feeling the heat. Sure, there is greater willingness by some Republican members to oppose a war if the president is a Democrat. But there are also Democrats openly supporting the war because the president wants them to. The decisive factor has been public pressure.

Senators and representatives have been turned around by their constituents, and that minority still supporting an attack on Syria openly says they’re defying the people who elected them. If there is no vote in Congress, it will be because the vote would fail.

Now is the time for Congress and the president to hear our voices more loudly than ever.

Secretary Kerry stressed on Monday that he hadn’t been serious about a diplomatic solution. It was just “rhetoric.” He was just pointing out the “impossibility” of Assad handing weapons over. He didn’t want anyone to take it seriously. Not when we have to get a war started. Not when the clock is ticking and he has already Colin-Powelled himself in front of his old committee with his wife behind him and protesters with bloody hands filling the room and everybody snickering when he claimed al Qaeda would install a secular democracy. Not after all THAT!

How can you ask a man to be the last one to lie for a dead idea?

Democratic Congresswoman Barbara Lee has a proposal for a diplomatic resolution. Republican Congressman Chris Smith has proposed a United Nations war crimes tribunal. (One might hope it will even look at the crimes of both sides in the Syrian war.) The always obvious, but hidden, fact that there are alternatives to bombing people is bursting out all over.

Sure, some people dislike this war because it would cost money, or because the Iraqis are ungrateful for the destruction of their country, or because Obama was born in Africa, but mostly people oppose this war for very good reasons — and the financial cost is not really a bad reason.

From right to left, people don’t think the United States should be the world’s vigilante. From left to right, people don’t believe the justifications presented without evidence. From right to left, people understand that killing people with the right weapons to protest their being killed with the wrong weapons is little bit crazy. From left to right, people don’t believe tales of short and easy wars that will pay for themselves. And, across the political spectrum, people have begun to be able to smell lies, even when those lies are wrapped in flags and uniforms.

We should give our government credit for listening — if it listens. By no means are we out of the woods yet. If you want to be able to say you were part of the movement that prevented a US war, now is the time to email and telephone and join in activities. We should not, however, fantasize that our government secretly held our position against the war it was trying to roll out, before we compelled it to hold our position.

Let them thump their chests a bit about how their threats won something out of Assad, if that allows their war fever to pass. But don’t for a minute lose the significance of what the US public has done to the otherwise broken US government. Out of whatever combination of factors, it just may turn out that we’ve stopped a war. Which means that we can stop another war. Which means that we can begin to work our way out of the war machine that has eaten our economy, our civil liberties, our natural environment, and our soul.

Assad may be lying. Or Obama may lie that Assad is lying. Or this whole thing may otherwise fall apart and the push for this war be back with a full-court press on Congress. But we can stop it if we choose to do so. We can push as hard for peaceful solutions in Syria as we’ve pushed to prevent the bombs from falling. In fact, we can push 10 times harder.

And the warmakers will be back with another war. Have no fear of that. Seriously, have no fear of it: We are a super-power. They are a vestige of a barbaric practice that has become an anachronism even while remaining our largest public investment.

They are dinosaurs. They’ll come back with a “defensive war”. That was their biggest failure this time; they didn’t make Syria a threat. Senator Harry Reid on Monday painted Syria as Nazi Germany, but he sounded like Elmer Fudd warning of a killer rabbit.

Laughter is our most potent tool. We must mock their fear-mongering. We must laugh at their claims of power and benevolent intent. We must ask to see the list of nations that are grateful for past bombs. We must inquire whether senators who play video poker while debating war plans, or secretaries of state who promise wars that will be both tiny and significant with no impact and a decisive result, are perhaps in need of better medication.

But let’s not count our doves before they hatch. Get in on this successful movement now. It’s going to be one to tell your grandchildren about.