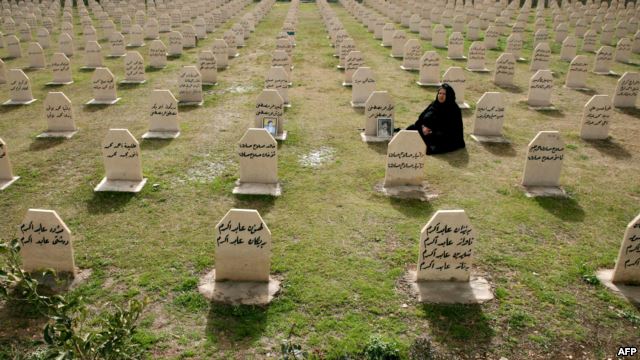 Return of chemical warfare resonates among survivors In Iran, Iraq

Hoshmand Morad vividly remembers the day his city suffered the deadliest chemical-weapons attack ever carried out on a civilian population.

The air suddenly smelled of apples. Pink, white, and yellow clouds cast a pall over the city. Dead bodies littered the road.

These are childhood memories for Morad, who was just 6 years old when his native city of Halabja, in Iraq’s Kurdish region, was targeted in a chemical bombing campaign carried out by Iraqi leader Saddam Hussein’s air force. Human Rights Watch estimates that as many as 5,000 residents of the city were killed and 10,000 injured in the March 16, 1988, attack.

Many died instantly from the effects of the sarin, VX, and mustard gases believed to have been used. Others suffered from severe blisters and vomiting before succumbing, according to eyewitnesses and various reports.

With Morad’s parents among the dead, he was driven by his uncle to a new life in neighboring Iran. He had hoped the horrors of that day would never be repeated. But that hope was dashed last month when Morad learned that chemical weapons had been used in the suburbs of Syria’s capital city, Damascus.

Morad says he watched images and videos of the August 21 attack in Ghouta with pain. “I felt very sad, I cried for them. It reminded me of the day when Saddam Hussein used chemical weapons against children, women, young and old residents of Halabja,” he says. “The feeling was shared by all Halabja survivors who demonstrated and called on the international community and organizations to investigate this crime and bring to court those who use chemical weapons and also those who produce them.”

About 5,000 Kurdish adults and children were killed by the Iraqi chemical attack on the town of Halabja in northeastern Iraq on March 16, 1988.

Today in his early 30s, Morad uses his position as spokesman of the Halabja Chemical Victims Society to remind the world of the horrors of chemical warfare. Speaking to RFE/RL from Halabja, he describes chemical weapons as “a danger to the future of humanity.”

Morad’s warnings are echoed by Zmnako Mohammed Ahmad, another survivor of the Halabja gas attack. Ahmad lost his father and four siblings in the attack, and it took 22 years for him to be reunited with his mother.

Ahmad, whose mother still suffers from respiratory problems as a result of her exposure to chemical agents, says there is no room for leniency toward those behind the attack near Damascus. “About 5,000 people were martyred in Halabja, including my relatives. About 68 percent of those killed were children and women,” he says. “Today, in Syria, most of the victims are children. I believe that those who kill children should be dealt with in the toughest way.”

The United States and Western partners have pinned the blame firmly on the regime of Syrian President Bashar al-Assad, which is in the third year of a brutal civil war. Secretary of State John Kerry has cited a U.S. intelligence assessment estimating that the Ghouta attack killed 1,429 people, including 426 children.

Russia and China have countered U.S. President Barack Obama’s argument that the world has a moral responsibility to punish the Syrian regime over its use of chemical weapons. Moscow has left open the possibility that Syrian rebels could be responsible for the attack, and has called for indisputable evidence of Assad’s guilt to be presented. Beijing has warned of the negative effects a military intervention in Syria would have on the global economy.

The use of chemical weapons, regardless of who used them, has resulted in universal condemnation, however. Ahmad sees that a positive, but he wants to see more than words. “In 1988, when the Halabja chemical bombing took place, the United States was silent. The whole international community was silent,” he says. “Several years later, in 2003, the U.S. helped us get rid of the Baathist regime and Saddam Hussein. I hope the same happens today and the U.S. helps the Syrian people.”

Following the Halabja attack, which became a symbol of the brutality of Hussein’s regime, the world did not intervene.

The international community was also largely silent after chemical weapons were used against tens of thousands of Iranian soldiers and civilians during the 1980-88 Iran-Iraq War. The United States played a role in those attacks, according to a recent report by “Foreign Policy,” by providing Iraq with tactical and intelligence information that it exploited to gas Iranian soldiers.

As a result, many of the estimated 100,000 survivors of those attacks against Iran are skeptical of Washington’s humanitarian concerns when it comes to the use of chemical weapons in Syria.

Among them is Shahriar Khateri, a physician and a veteran of the Iraq-Iraq War who was exposed to chemical warfare. He raises awareness about the plight of victims by serving as the director of international relations for Iran’s Society for Chemical Weapons Victims Support.

“At least seven official documents regarding chemical attacks against Iran were submitted to the UN but no action was taken,” Khateri says. “There are also documents that prove that the U.S. and some EU countries helped Saddam. With regard to Syria, no official report has been issued yet, but the U.S. is in a hurry to go to war.”

On August 27, a second Iranian group condemned the use of chemical weapons in Syria as an “inhuman crime.”

The Society for the Defense of the Rights of Chemical Weapons Casualties in Sardasht, located in the Kurdish-populated area unofficially known as Iran’s Kurdistan, called on the United Nations and rights organizations to immediately prevent the continuation of such atrocities through humanitarian intervention and by bringing the perpetrators to justice.

Sardasht came under chemical attack several months before the 1988 attack on Halabja. But Sardasht received scant media coverage, and was quickly forgotten. Not so for survivors of the bombings, many of whom suffer from the long-term consequences of chemical agents.

“Once more the breaths are imprisoned in the chests, tears are falling, bloody coughs have colored the green grass, and the rain of death is pouring on innocent people,” a statement issued by the society reads. The statement adds that had the chemical bombings of Sardasht and Halabja been taken seriously, the tragic events that unfolded in Syria never would have happened.