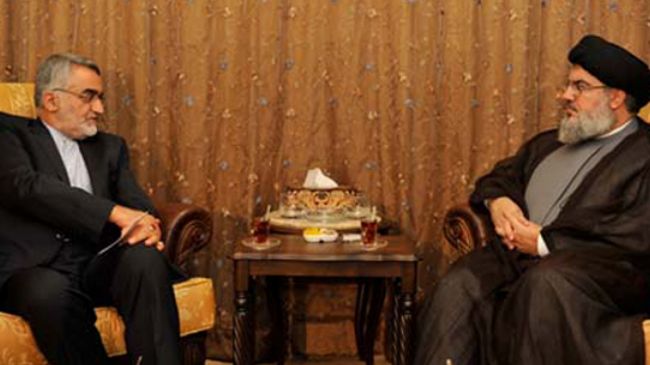 Zionist lobby behind US adventurism in Middle East: Nasrallah

Hezbollah Secretary-General Seyyed Hassan Nasrallah says the “Zionist lobby” is behind the US adventurism in the Middle East.

Despite the dominance of the Zionists over the world’s biggest media networks and the ongoing media hype to distort realities about Syria, the US failed to execute its off-the-cuff threat against Syria, Nasrallah said in a meeting with visiting senior Iranian lawmaker Alaeddin Boroujerdi in Beirut on Tuesday.

This indicates that the world does not accept illogical US-Israeli justifications, he added.

Boroujerdi, who is the chairman of Iran Majlis National Security and Foreign Policy Committee, said senior Syrian officials, army and people are fully prepared to defend their country against any possible attack.

“The US must understand global messages before making any unwise decision, and take advantage of the existing opportunity to save itself and its allies from this dangerous situation,” the top Iranian legislator stated.

Earlier in the day, Boroujerdi held a meeting with Lebanese President Michel Suleiman to discuss mutual relations and the latest developments in the Middle East, particularly the ongoing crisis in Syria.

US President Barack Obama has declared his intention to order military action against the Syrian nation without a UN mandate.

Obama’s threat came following an extensive publicity campaign by major Western media conglomerates immediately after the use of chemical weapons in Syria, accusing the government of Syrian President Bashar al-Assad of launching the attack.

The Syrian government has fiercely rejected the Western allegations, insisting that foreign-backed opposition militants were behind the deadly chemical attack.