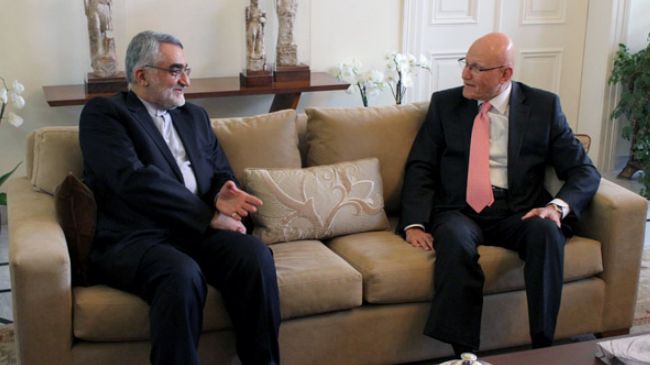 “We believe that this country (Lebanon) can permanently play an important role in regional security via unity and solidarity,” Chairman of the Majlis National Security and Foreign Policy Committee Alaeddin Boroujerdi said in a meeting with Lebanese Prime Minister Tammam Salam in Beirut on Monday.

The Iranian lawmaker expressed hope that the Lebanese premier would take office as soon as possible.

Salam, for his part, described the ongoing situation in the region as “sensitive” and said extremist religious provocations would only serve the interests of Israel.

Speaking to reporters after the meeting, Boroujerdi pointed to his recent talks with Syrian officials in Damascus and said that Iran supports Syria as an important part of the axis of resistance in the region.

He reaffirmed Iran’s objection to any military attack against Syria and the use of chemical weapons.

Heading an Iranian parliamentary delegation, Boroujerdi arrived in the Syrian capital on Saturday on an official three-day visit to hold talks with the country’s senior officials on the ongoing crisis in the Arab state.

The Iranian lawmakers wrapped up their trip to Syria and arrived in Beirut for talks with top Lebanese officials.

September 3, 2013
US miscalculation on Syria will be disastrous: Iran MP
Siri Island to turn into Iran’s gas export hub: Official