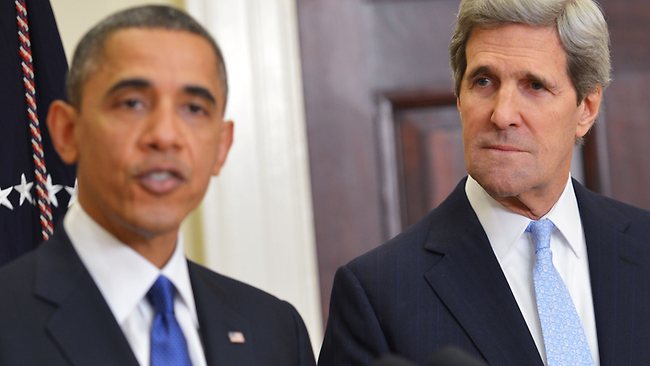 President pulls lawmakers into box he made

WASHINGTON — President Obama’s aides were stunned at what their boss had to say when he summoned them to the Oval Office on Friday at 7 p.m., on the eve of what they believed could be a weekend when American missiles streaked again across the Middle East.

President Obama on Saturday presented his most fervent case yet that Syria needed to be punished for a deadly chemical weapons attack.

In a two-hour meeting of passionate, sharp debate in the Oval Office, he told them that after a frantic week in which he seemed to be rushing toward a military attack on Syria, he wanted to pull back and seek Congressional approval first.

He had several reasons, he told them, including a sense of isolation after the terrible setback in the British Parliament. But the most compelling one may have been that acting alone would undercut him if in the next three years he needed Congressional authority for his next military confrontation in the Middle East, perhaps with Iran.

If he made the decision to strike Syria without Congress now, he said, would he get Congress when he really needed it?

“He can’t make these decisions divorced from the American public and from Congress,” said a senior aide, who spoke on the condition of anonymity to discuss the deliberations. “Who knows what we’re going to face in the next three and a half years in the Middle East?”

The Oval Office meeting ended one of the strangest weeks of the Obama administration, in which a president who had drawn a “red line” against the use of chemical weapons, and watched Syrian military forces breach it with horrific consequences, found himself compelled to act by his own statements. But Mr. Obama, who has been reluctant for the past two years to get entangled in Syria, had qualms from the start.

Even as he steeled himself for an attack this past week, two advisers said, he nurtured doubts about the political and legal justification for action, given that the United Nations Security Council had refused to bless a military strike that he had not put before Congress. A drumbeat of lawmakers demanding a vote added to the sense that he could be out on a limb.

“I know well we are weary of war,” Mr. Obama said in the Rose Garden on Saturday. “We’ve ended one war in Iraq. We’re ending another in Afghanistan. And the American people have the good sense to know we cannot resolve the underlying conflict in Syria with our military.”

The speech, which crystallized both Mr. Obama’s outrage at the wanton use of chemical weapons and his ambivalence about military action, was a coda to a week that began the previous Saturday, when he convened a meeting of his National Security Council.

In that meeting, held in the White House Situation Room, Mr. Obama said he was devastated by the images of women and children gasping and convulsing from the effects of a poison gas attack in the suburbs of Damascus three days before. The Aug. 21 attack, which American intelligence agencies say killed more than 1,400 people, was on a far different scale than earlier, smaller chemical weapons attacks in Syria, which were marked by murky, conflicting evidence.

Last Sunday, it issued a statement dismissing the need to wait for United Nations investigators because their evidence, the statement said, had been corrupted by the relentless shelling of the sites. By Monday, Secretary of State John Kerry, who had long advocated a more aggressive policy on Syria, delivered a thunderous speech that said President Bashar al-Assad was guilty of a “moral obscenity.”

By midweek, administration officials were telling reporters that the administration would not be deterred by the lack of an imprimatur from the Security Council, where Syria’s biggest backer, Russia, holds a veto.

Yet the president’s ambivalence was palpable, and public. While Mr. Kerry made his fiery case against Mr. Assad, Mr. Obama was circumspect, sprinkling his words with caveats about the modest scale of the operation and acknowledgments of the nation’s combat fatigue.

“We don’t have good options, great options, for the region,” the president said in an interview Wednesday on PBS’s “News Hour,” before describing a “limited, tailored” operation that he said would amount to a “shot across the bow” for Mr. Assad.

White House aides were in the meantime nervously watching a drama across the Atlantic. They knew that Prime Minister David Cameron’s attempt to win the British Parliament’s authorization for action was in deep trouble, but the defeat on a preliminary motion by just 13 votes on Thursday was a jolt. Although aides said before the vote that Mr. Obama was prepared to launch a strike without waiting for a second British vote, scheduled for Tuesday, the lack of a British blessing removed another layer of legitimacy.

Mr. Obama was annoyed by what he saw as Mr. Cameron’s stumbles, reflecting a White House view that Mr. Cameron had mishandled the situation. Beyond that, Mr. Obama said little about his thinking at the time.

It was only on Friday that he told the aides, they said, about how his doubts had grown after the vote: a verdict, Mr. Obama told his staff, that convinced him it was all the more important to get Congressional ratification. After all, he told them, “we similarly have a war-weary public.”

And if the British government was unable to persuade lawmakers of the legitimacy of its plan, shouldn’t he submit it to the same litmus test in Congress, even if he had not done so in the case of Libya?

Mr. Obama’s backing of a NATO air campaign against Col. Muammar el-Qaddafi in 2011 had left a sour taste among many in Congress, particularly rank-and-file members. More than 140 lawmakers, Republicans and Democrats, had signed a letter demanding a vote on Syria.

Moving swiftly in Libya, aides said, was necessary to avert a slaughter of rebels in the eastern city of Benghazi. But that urgency did not exist in this case.

Indeed, Gen. Martin E. Dempsey, the chairman of the Joint Chiefs of Staff, told Mr. Obama that the limited strike he had in mind would be just as effective “in three weeks as in three days,” one official said.

Beyond the questions of political legitimacy, aides said, Mr. Obama told them on Friday that he was troubled that authorizing another military action over the heads of Congress would contradict the spirit of his speech last spring in which he attempted to chart a shift in the United States from the perennial war footing of the post-Sept. 11 era.

All of these issues were on Mr. Obama’s mind when he invited his chief of staff, Denis R. McDonough, for an early evening stroll on the south lawn of the White House. In the West Wing, an aide said, staff members hoped to get home early, recognizing they would spend the weekend in the office.

Forty-five minutes later, shortly before 7, Mr. Obama summoned his senior staff members to tell them that he had decided to take military action, but with a caveat.

“I have a pretty big idea I want to test with you guys,” he said to the group, which included Mr. McDonough and his deputy, Rob Nabors; the national security adviser, Susan E. Rice, and her deputies, Antony J. Blinken and Benjamin J. Rhodes; the president’s senior adviser, Dan Pfeiffer; and several legal experts to discuss the War Powers Resolution.

The resistance from the group was immediate. The political team worried that Mr. Obama could lose the vote, as Mr. Cameron did, and that it could complicate the White House’s other legislative priorities. The national security team argued that international support for an operation was unlikely to improve.

At 9 p.m., the president drew the debate to a close and telephoned Mr. Kerry and Secretary of Defense Chuck Hagel to tell them of his plans.