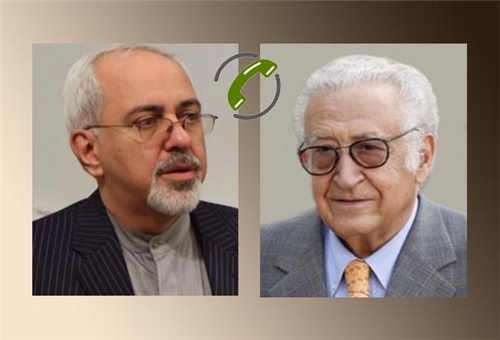 TEHRAN (FNA)- Iranian Foreign Minister Mohammad Javad Zarif, in a phone conversation with UN-Arab League Special Envoy on Syria Lakhdar Brahimi, condemned the use of chemical weapons in Syria, and warned the international community that any aggression against Syria would have dire consequences for the entire region.

In a phone conversation with the senior UN envoy on Friday, the Iranian minister once again condemned the use of chemical weapons in Syria, and expressed concerns over the possible military intervention in the Muslim country by the US due to the deadly chemical attack near Damascus.

US President Barack Obama claimed on Wednesday that the Syrian government would face “international consequences” for last week’s deadly chemical attack, but made clear any military response would be limited to avoid dragging the United States into another war in the Middle-East.

The foreign-backed opposition has blamed the Syrian government for the deadly attack.

The Syrian government, however, has vehemently denied the accusations, saying the chemical attack was carried out by the militants themselves as a false-flag operation.

The US has already beefed up its military presence in the Eastern Mediterranean.

According to media reports, four US warships and a submarine are in the region and the fifth and sixth destroyer are on the way towards the Mediterranean sea. All destroyers are cruise-missile equipped.

The US is rushing to attack Syria over an alleged chemical attack in Syria, before results of UN investigations over the story are final, Al-Alam reported.

The Obama administration, backed with Israeli intelligence services, says it has concluded that the Syrian army has used chemicals near Damascus.

US claims come as Syria has already provided UN with evidences on at least three chemical attacks carried out by US-backed militants near the Syrian capital.

Israeli intelligence information is widely believed to have played a central role in paving the way for justifying US attack on Syria.

The US has conspicuously insisted that the story is “undeniable” even though they have never presented any proof of it, but the secret “proof” which is never put forth for public scrutiny apparently comes straight from Israeli intelligence.

Israeli military intelligence told the US they had wiretapped the Syrian government and heard them talking about using chemical weapons, insisting that “proved” that they were the ones who did it.

Israel has been pushing these stories multiple times, always citing dubious secret evidence that the public never gets to see.