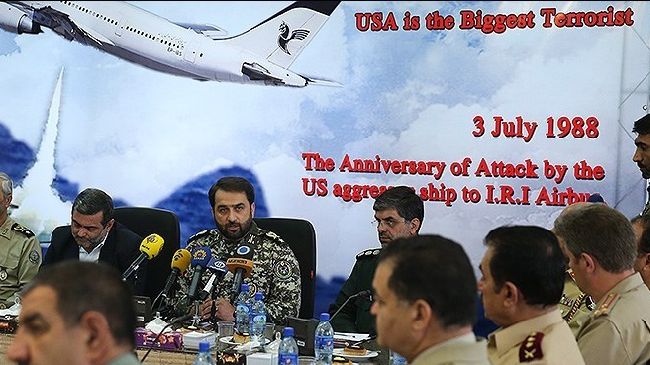 Brigadier General Farzad Esmaili (C) addresses a ceremony to commemorate the 25th anniversary of the downing of Iran Air Flight 655 by the US Navy, on July 3, 2013.

TEHRAN (FNA)- Iran announced on Saturday that it has finalized construction of space radars to detect satellite and space objects’ trajectories, adding that the country is now using new passive phased array radars to detect stealth targets and cruise missiles.

“The executive stages of Sepehr (Sky) space radar with the range of over 2,500km have been accomplished and the point for its deployment has also been specified,” Commander of Khatam ol-Anbia Air Defense Base Brigadier General Farzad Esmayeeli told reporters in Tehran on Saturday.

Addressing the second conference on radar technology systems here in Tehran at the time, Vahidi said Iran has witnessed “a jump” in the field of radar designing and manufacturing.

“Today, we have many achievements in different fields. Radars covering ranges of 500km to 700km have been manufactured and production of radar systems with 1,000km to 3,000km of range is underway,” Vahidi explained.

He added that Iran is trying to develop radar systems to detect satellites, and said to do so, the radar systems are connected in phased arrangements to cover very long ranges and detect and track satellites.

Iranian officials have announced that the country has now reached self-sufficiency in producing radar systems in different frequencies and for various ranges.