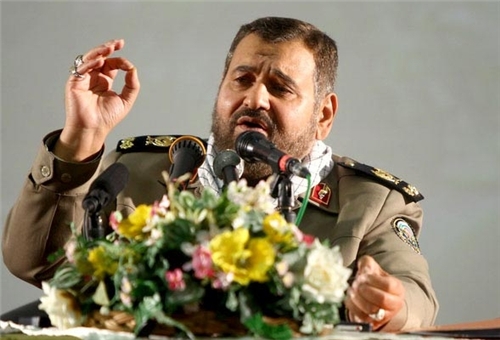 Iranian commander warns US to avoid further massacre in region

TEHRAN (FNA)- Chief of Staff of the Iranian Armed Forces General Hassan Firouzabadi cautioned the US to avoid further war and bloodshed in the region.

The US should refrain from further massacre and bloodshed and concentrate on its own problems, Firouzabadi said on Thursday.

He also warned Washington and its allies against any attack on Syria, saying any military action against the country will burn the Zionist regime.

The senior commander underlined that any new military operation in the region will inflict serious damages, stressing that all such moves would only benefit the Zionist regime.

He called on the US scholars and elites as well as the international society to find proper solutions to the problems made by the US leaders in the whole world.

On Saturday, US Defense Secretary Chuck Hagel claimed that the White House is studying different military options against Syria.

Hagel suggested the Pentagon is moving forces into place ahead of possible military action against Syria, even as President Barack Obama voiced caution.

On the same day, a senior Iranian lawmaker reiterated that the US is trying to repeat the Iraq scenario in Syria.

The US invaded Iraq in 2003 on the same excuse that former Iraqi dictator Saddam Hussein had stockpiled Weapons of Mass Destruction (WMD) in the Arab country, but they found nothing there.

“The Americans are trying to exercise the same scenario in Syria that they implemented 10 years ago in Iraq, where they could not find even one kilogram of chemicals…,”  member of the parliament’s National Security and Foreign Policy Commission Mohammad Hassan Asafari said.

He said the chemical weapons accusations leveled against the Syrian government are not worth and only meant to provide an excuse for a military intervention in the Muslim country.

The prominent legislator stressed that since the Syrian army has gained remarkable victories over the armed rebels and pushed them out of the Muslim country’s strategic cities, including Damascus and Homs, and also due to the fact that the West, specially the US, could not achieve its goals in Syria, they are trying to launch a military strike against the Syrian government and nation by involving the NATO.