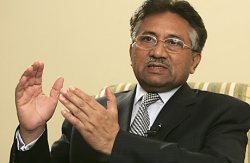 Musharraf, who was president during the murder of Benazir Bhutto, rejected the charges and termed them as politically-motivated.

He was produced in the court under tight security.

Benazir was assassinated in a suicide attack and gun shots on December 27, 2007, after she addressed an election campaign rally.

The Federal Investigative Agency (FIA) presented a four-point charge sheet against Musharraf in the Anti-Terrorism Court (ATC), accusing him for hatching a conspiracy, in connection with the killing of Benazir Bhutto.

The charge sheet submitted contained the statements of four witnesses, including an American journalist Marc Siegel, as well as Benazirs own statement.

FIA officials said that the charge-sheet has been prepared on the basis of Siegels statement, who had claimed that Musharraf called and threatened her.

Siegel, who has served as lobbyist for Benazir in the US, had also stated that she had told him that Musharraf would be responsible for any harm to her.

He had earlier stated that he was with Benazir in London when former Musharraf had denied the allegations.

The charge-sheet stated that the statement of the American established Musharraf as the prime accused in Benazirs murder. It also leveled terrorism accusations against the former president. The document stated that Musharraf has failed to prove his innocence in the case.

The ATC last year had summoned Siegel to personally appear in the court and record his statement.

Musharraf has been arrested in the murder case of a tribal elder, Nawab Akbar Bugti, who was killed in military operation in 2006.

He has been kept at his home in Islamabad over security concerns. His house has been declared as a sub-jail.