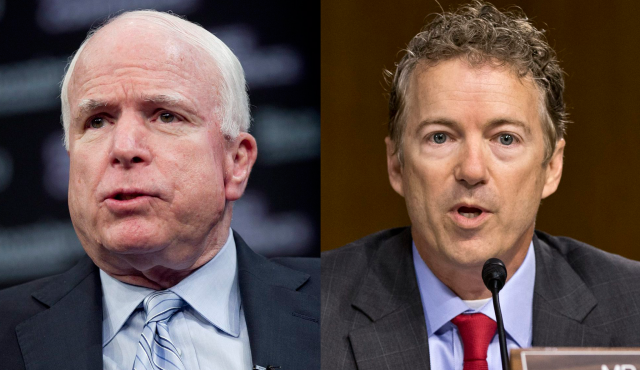 Sen. Rand Paul: Aid more likely to ‘buy a chateau in Paris’ for an Egyptian military leader than ‘bread in Cairo’ for the poor.

Republican lawmakers are split over whether the U.S. should cut off aid toEgypt amid spiraling violence.

Sen. John McCain of Arizona renewed his call Sunday to curtail aid as the Egyptian military continues to crack down on protesters seeking the return of ousted Egyptian President Mohammed Morsi.

“For us to sit by and watch this happen is a violation of everything that we stood for,” said the senior Republican on the Armed Services Committee. “We’re not sticking with our values.”

Rep. Pete King, a New York Republican, however, said cutting off aid could reduce U.S. influence over Egypt’s interim government, which controls access to strategic resources, including the Suez Canal.

“I’m reluctant to cut off aid,” said King, who chairs the House panel on Counterterrorism and Intelligence.

U.S. President Barack Obama has denounced the violence, canceled joint military exercises scheduled for September and delayed the delivery of four F-16 fighter jets. But the White House has refused to declare Morsi’s removal a coup – a step that would require Obama to suspend $1.3 billion in annual military aid. The president insists that the U.S. stands with Egyptians seeking a democratic government. But he says America cannot determine Egypt’s future.

King said there are no good choices in Egypt. Morsi, a leader of the Muslim Brotherhood, was democratically elected. But, King said, the Islamist fundamentalist group has not demonstrated a commitment to democracy.

The military ousted Morsi on July 3 after millions of Egyptians took to the streets to demand he step down, accusing him of giving the Brotherhood undue influence and failing to implement vital reforms or bolster the ailing economy.

Republican Sen. Rand Paul of Kentucky, who represents the party’s libertarian, anti-interventionist wing, said U.S. ¬aid to Egypt was more likely to “buy a chateau in Paris” for an Egyptian military leader than “bread in Cairo” for the poor.

“I don’t think we’re buying any friendship with the Egyptian people,” Paul said, especially when people see tanks supplied by the U.S.¬to the Egyptian military on the streets of Cairo.

“We are not winning the hearts and minds of the Egyptian people,” said Paul, a member of the Senate Foreign Relations Committee. “The aid has to end.”

Sen. Bob Corker, a Tennessee Republican, had resisted calls to cut off aid. But on Sunday, he switched positions.

“I think we need to look at the tiers of our aid,” said Corker, top Republican on the Senate Foreign Relations Committee. “Let’s face it, most of the aid has gone out the door this year.”

Corker said he expects Congress to debate next year’s aid this fall, after lawmakers return from their summer recess.

“Look, I condemn what’s happened with the military, but I also condemn what in essence was a political coup by the Muslim Brotherhood,” Corker said. “And we need to move this debate along and this fall hopefully, again, focus on what is our national interests. And there still are things within Egypt that are very much in our national interest. And we need to keep the lines of communication open.”

McCain spoke on CNN’s “State of the Union,” King and Paul made their comments on “Fox News Sunday,” and Corker appeared on ABC’s “This Week.”