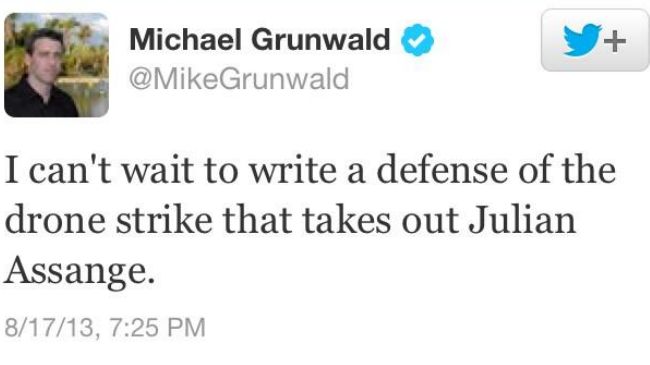 A senior American correspondent has indirectly called on the US government to kill WikiLeaks founder Julian Assange by a drone strike.

“I can’t wait to write a defense of the drone strike that takes out Julian Assange,” Time Magazine’s senior national correspondent Michael Grunwald tweeted on Saturday.

He immediately deleted the tweet, but several users captured his words and re-tweeted the 140 character death wish, Prison Planet reported.

His tweet came less than one month after he wrote an article advocating the creation of a 1984-style police state within the United States.

Assange, who is an investigative journalist, became famous after WikiLeaks published hundreds of thousands of top-secret US diplomatic cables on its website in 2010.

The 42-year-old fugitive has taken refuge in the Ecuadorean Embassy in London for more than a year to avoid extradition to Sweden on sex crime allegations.

The WikiLeaks founder says his extradition to Sweden is a first step in efforts to move him to the United States, where he is known as a whistleblower for leaking classified documents.