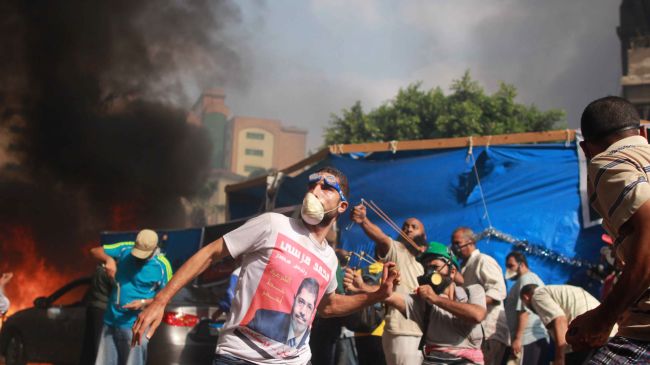 The Egyptian Interior Ministry said in a statement early Saturday that “the number of Muslim Brotherhood elements arrested reached 1004,” including 558 in Cairo alone, Al-Alam reported.

One protester said around 1,000 people have been trapped in the mosque, which had earlier held the bodies of over 20 people who died in Friday’s violence.

The Brotherhood said gunfire went on around the mosque for some time, but security officials accused the protesters of shooting at police from inside the mosque.

The Muslim Brotherhood’s Freedom and Justice Party (FJP) appealed for the prevention of another “massacre” after scores of pro-Mursi protesters were killed on Wednesday by the security forces.

The FJP said in a statement issued late on Friday that there were “thousands of people trapped” in the mosque and that shooting had been ongoing for “more than an hour without interruption”.

Muslim Brotherhood has also called for a week of daily protests in defiance of the government’s state of emergency and curfew.

On Friday, tens of thousands of Muslim Brotherhood activists and their supporters took part in what the Brotherhood called the “Day of Rage” against the army and its handpicked government.

Egypt has plunged into unrelenting string of violence since General Abdel Fattah al-Sisi, the head of the Egyptian armed forces, announced on July 3 that Mursi was no longer in office, declaring chief Justice of Egypt’s Supreme Constitutional Court Adly Mansour as the interim president. The army also suspended the constitution.

Army officials said Mursi, who took office in June 2012, was being held “preventively” by the military.