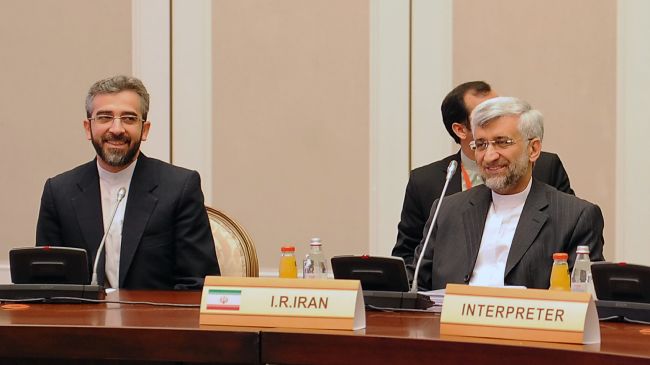 Kazakhstan has expressed its readiness to contribute to a deeper negotiating process between Iran and the P5+1 group of world power over Tehran’s nuclear energy program.

“Kazakhstan intends to continue to provide its logistics services. If necessary, we are ready to contribute to a deeper negotiating process,” Kazakhstani Deputy Foreign Minister Kairat Sarybai told reporters in Astana on Monday.

He added that Iran has reacted positively to Kazakhstan’s proposal to hold a fresh round of talks with the P5+1 group – China, Russia, France, Britain, the US and Germany, Itar-Tass reported.

“We expect Iran to end the formation of the government… If it necessary, we’re ready to facilitate the negotiating process,” Sarybai stated.

In a meeting with Iranian new President Hassan Rouhani in Tehran last week, Kazakh President Nursultan Nazarbayev voiced his country’s readiness to host the talks on Iran’s nuclear issue, according to the Kazakhstani presidential press service.

Nazarbayev paid an official visit to Tehran to partake in Rohani’s swearing-in ceremony which was held on August 4 in the presence of delegations from over 50 countries and top Iranian officials.

“I write to tell you that, together with the P5+1, I stand ready to continue talks to find a resolution [to Iran nuclear issue] as quickly as possible,” Ashton, who represents the six world powers in the comprehensive talks with Tehran, said in a letter to President Rouhani.

The letter comes on the same day that Rouhani expressed Tehran’s readiness to enter into “meaningful” negotiations with the P5+1.

Iran and the P5+1 group have held several rounds of talks on a range of issues, with the main focus being on Iran’s nuclear energy program. The two sides wrapped up their latest round of negotiations on April 6 in the Kazakh city of Almaty. An earlier meeting had been held in Almaty on February 26-27.

Tehran strongly rejects the groundless claim over its nuclear activities, maintaining that as a committed signatory to the Non-Proliferation Treaty and a member of the International Atomic Energy Agency, it has the right to use nuclear technology for peaceful purposes.