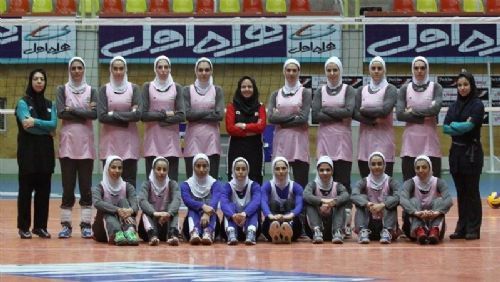 Tehran, Iran – August 12, 2013 – The Iran women’s national team has announced their 15 player line-up ahead of the 17th Asian Sr. Women’s Volleyball Championship of 2013, which will be held from September 13 to 21 at Nakhonpathom and Ratchaburi of Thailand.

The players will now begin a training camp, their eighth, under the leadership of head coach Mitra Shabanian. The first training camp, held at the end of April, was conducted with 30 players with the final selection process taking place after a series of rigourous training camps. The eighth round of training started on Sunday and will run until August 20 at the Olympic Academy camp.

The team also held a one week training camp in Baku, playing five friendly matches against the women’s team of Azerbaijan. “The camp helped us to find out our weak and strong points,” said coach Shabanian.

Along with Iran, 16 teams will participate in the 17th Asian Sr. Women’s Volleyball Championship, seeded in four groups on the basis of a serpentine system. The Iran women’s team goes into the competition ranked eight and will compete with teams from India, Philippines and China.

The top two teams will compete in the 2014 edition of the World Grand Prix, with the exception of China and Japan, who have qualified automatically for the event. The top eight teams from the Asian Championship will be eligible to compete in the fourth AVC Cup next year.