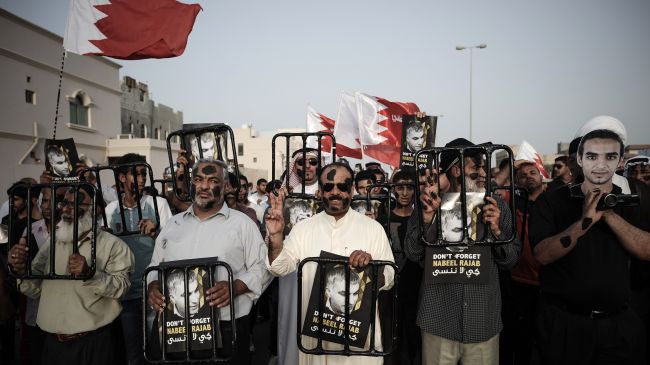 ‘Bahrain gets tougher on citizen journalists’

The Al Khalifa regime in Bahrain has stepped up its crackdown on citizen journalists ahead of a major opposition rally in the country, reports say.

On August 7, Bahraini King Hamad bin Isa Al Khalifa banned protests in the capital, Manama, ahead of the August 14 celebrations of the country’s independence from the United Kingdom.

The opposition is planning to hold a major protest on the same day. The Manama regime has warned that any protests would face the “force of the law.”

Sources say regime agents have confiscated computers, cameras, phones and every other electronic item that bloggers use to cover Bahraini people’s protests for the outside world.

The US woman was “using Twitter and a number of websites to publish articles on Bahrain that were deemed to incite hatred against the government and members of the royal family,” Bahrain’s Ministry of State for Communications said.

The Bahraini uprising began in mid-February 2011.

The Al Khalifa regime promptly launched a brutal crackdown on the peaceful protests and called in Saudi-led Arab forces from neighboring states.

Scores of people have been killed in the crackdown, and the security forces have arrested hundreds, including doctors and nurses.

The protesters say they will continue demonstrations until their demand for the establishment of a democratically elected government is met.