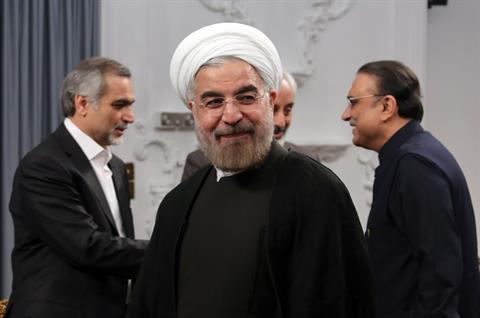 Just a few hours after the August 4 inauguration of Iran’s new president, Hassan Rohani, the White House issued a statement saying that Tehran would find a willing partner in Washington, should it choose to engage “substantively and seriously” on the issue of its controversial nuclear activities.

That sentiment bore little resemblance to what many members of Congress have been saying recently, which is that now is not the time to scale back tough sanctions. In fact, dozens of lawmakers are working to enact even tougher sanctions against the Islamic republic.

Rohani focused on what he characterized as Washington’s mixed signals in his first postinaugural press conference on August 6. “The statements of the White House are not in line with some of the behavior we’re seeing,” he said. “Overall, I’m not pessimistic about the future of negotiations.”

The 64-year-old moderate cleric said the Iranian establishment had “strong political will” to resolve the nuclear issue while preserving the rights of the Iranian people.

The former nuclear negotiator said constructive dialogue and negotiations based on mutual respect could lead to a “win-win” situation. He said Iran was ready to engage in serious talks without wasting time, and would respond  appropriately to practical measures by the United States.

But he seemed to express doubt that elected U.S. leaders are on the same page. “This dual track is putting the honesty of U.S. officials in question,” Rohani said. “Of course I don’t want to say if there is some hidden agenda between the Congress and the U.S. government. But practical U.S. policies will be the criteria for us.”

An ‘Ultimatum’ Ahead Of Talks

Rohani was reacting to a bill that passed overwhelmingly in the House of Representatives last week that would tighten restrictions on Iran’s oil industry and other industrial sectors. The legislation is likely to be become law after the Senate votes on it in September.

On August 5, 76 U.S. senators called on President Barack Obama to take a tougher line against Iran. “Until we see a significant slowdown of Iran’s nuclear activities, we believe our nation must toughen sanctions and reinforce the credibility of our option to use military force at the same time as we fully explore a diplomatic solution to our dispute with Iran,” the senators wrote in a letter to Obama.

Greg Thielmann, a senior fellow at the U.S.-based Arms Control Association and a former State Department intelligence analyst, says the letter gives the impression of inconsistency from Washington. “The way that the language in the letter is framed, and the increased sanctions called for, and the bill already passed by the House really gives the impression that the United States is delivering an ultimatum rather than trying to enter negotiations which will seek a win-win solution,” he says.

The State Department has expressed reservations about the sanctions legislation. “We do have some concerns over the specific contents of the legislation and look forward to working with the Congress as this legislation moves to the Senate,” deputy spokeswoman Marie Harf said last week.

Harf did not provide details about those concerns but said that the sanctions needed to be implemented “in a responsible manner.”

Thielmann believes Congress is making talks with Iran more difficult for the White House. “Instead of giving the president of the United States some running room in terms of wavers for some aspects of the sanctions that are already in place,” he says, “instead the Congress is insisting on new sanctions and the removal of waivers, which makes it particularly difficult for the president to negotiate an agreement with Iranians because obviously the Iranians are going to want some evidence that their cooperation will allow for a scaling back of the sanctions that are definitely hurting their country. ”

At his press conference, Rohani did not mention any concrete steps Tehran wanted to see the United States take to show its goodwill, but he warned against the use of threats and sanctions. He said talks were the only solution to the nuclear impasse. “If logic is the basis of negotiations, the doors are open,” Rohani said.

Ali Vaez, an Iran analyst at the International Crisis Group, says the action by Congress, and Rohani’s reaction, is a reminder that the fundamentals of the crisis over Iran’s nuclear program have not changed. “Differences over reciprocity, sequencing, rights, and responsibilities will continue to bedevil nuclear talks between Iran and the P5+1. Misperceptions and misguided expectations are also going to persist,” Vaez says.

Rohani dodged a question on whether he was ready to meet with Obama during September’s United Nation’s General Assembly in New York. He said his trip was still under review and that no final decision had been made.

Iran's nuclear program, Quoted, Rowhani 1st press conference, US policy toward Iran August 7, 2013
Iran’s nuclear programme – there is “a change of tone but the substance is the same”
US sanctions ‘structural violence’ against Iranians: Analyst