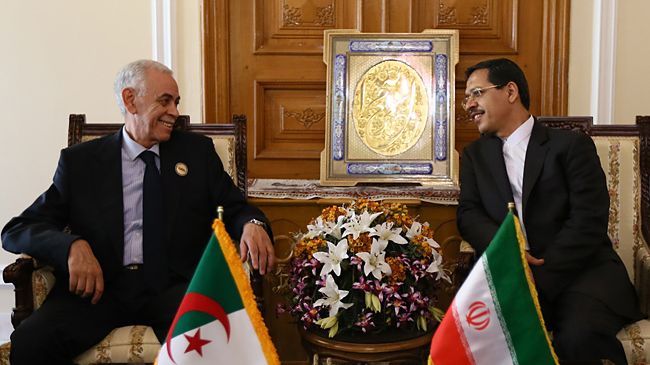 Secretary General of the Council of the Nation (Senate) of Algeria Hafnaoui Amrani has called for further expansion of diplomatic relations and cooperation between Algiers and Tehran in diverse areas.

During a meeting with the Deputy Majlis speaker for Executive Affairs Ali Afrashteh in Tehran on Monday, Amrani praised growing relations between the two countries, stressing that the Algerian parliament and government welcome enhancement of ties with the Islamic Republic of Iran.

He also called for constant interactions between Algerian and Iranian parliamentary officials, and expressed hope that Algiers and Tehran exchange their legislative expertise.

Afrashteh, for his part, pointed to the numerous affinities between Iran and Algeria and stated that expansion of friendly ties with Algeria is among the priorities of the Majlis.

He said historical and religious commonalities between the Iranian and Algerian nations together with the strong resolve of the two countries’ parliaments can facilitate the development of such ties.

Afrashteh also described parliamentary cooperation between Iran and Algeria in the international arena, especially in the Islamic Inter-Parliamentary Union, as an important factor in the enhancement of relations between the two countries.

On Sunday, Iranian President Hassan Rohani said the Islamic Republic is completely ready to expand and deepen mutual relations with Algeria in economic, cultural and political fields and believes that the settlement of regional issues requires the participation of regional countries.

He made the remarks in a meeting with Algerian Parliament Speaker Abdul Qadir bin Saleh.