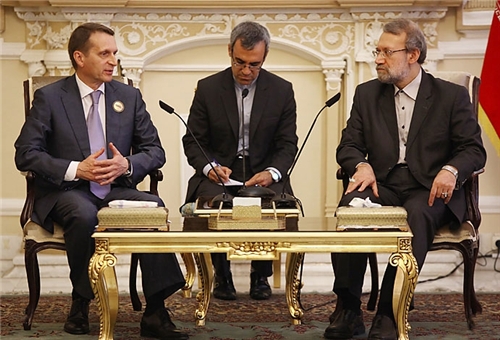 At the meeting, Larijani described Russia’s role in major regional issues, specially with regard to Syria, as highly important, and said Iran welcomes Russia’s role in the establishment of stability and tranquility in the region.

The speaker of the Russian State Duma said the two friendly countries of Iran and Russia can help establish security and stability in Central Asia and Middle-East.

Naryshkin arrived in Iran to participate in the swearing-in ceremony of President Hassan Rouhani on Sunday.

The swearing-in ceremony of Rouhani kicked off in the capital, Tehran, at 16:00 local time (1130 GMT) on Sunday in the presence of senior Iranian state and military officials as well as foreign dignitaries.

Late in May, Iranian Deputy Foreign Minister for Arab and African Affairs Hossein Amir Abdollahian underlined that Iran and Russia will firmly stand united against the front of the US and its allies in the upcoming Geneva II Conference on Syria.

“The US and its allies, who were calling on al-Assad to step down in Geneva I, will also concentrate their efforts in the same direction in Geneva II Conference, but Iran and Russia believe that an agreement should be reached in Geneva II according to which violence ends and tranquility is restored in Syria,” the Iranian deputy foreign minister told al-Alam satellite TV.

“Then a transitional government will be set up or any political solution approved by the Syrian people will be put into action,” Amir Abdollahian continued.

The five permanent members of the UN Security Council as well as the European Union, Syria’s neighbors Turkey and Iraq, and Kuwait and Qatar attended a meeting in Geneva on June 30, 2012, on Syria (dubbed as Geneva I) which failed to address the real problems in the crisis-hit country. Despite both the then UN mediator, Kofi Annan, and Russia’s insistence on the inclusion of Tehran in the talks, Iran was not invited to the conference due to the United States’ rigid opposition.

Russia’s Foreign Minister Sergei Lavrov revealed earlier in the month that he had discussed Iran’s involvement in a conference to resolve the crisis in Syria, when he met his US counterpart John Kerry early in May, stressing that the conference cannot succeed without Iran’s participation.

The Russians and Americans agreed during Kerry’s visit to Moscow to set up a conference of international players to end the crisis in Syria. Moscow wants to involve all the nations which took part in the Geneva conference on Syria, and says without Iran’s participation the conference cannot succeed.

In October 2011, calm was eventually restored in the Arab state after President Bashar al-Assad started a reform initiative in the country, but Israel, the US and its Arab allies are seeking hard to bring the country into chaos through any possible means. Tel Aviv, Washington and some Arab capitals have been staging various plots in the hope of stirring unrests in Syria once again.

The US and its western and regional allies have long sought to topple al-Assad and his ruling system. Media reports said that the Syrian rebels and terrorist groups have received significantly more and better weapons in recent weeks, a crime paid for by the Persian Gulf Arab states and coordinated by the United States.