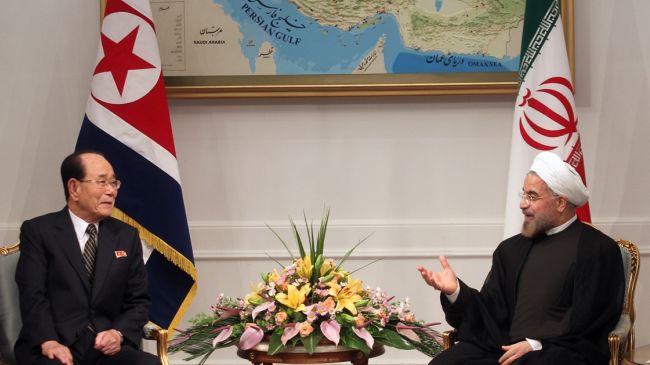 “We believe that the US and the Western countries are always looking for excuses to confront countries that they perceive as non-friendly,” Rohani said in a meeting with Chairman of the Presidium of the North Korean Supreme People’s Assembly (SPA) Kim Yong-nam on Saturday.

“This is while all of Iran’s nuclear sites are today under the supervision of the envoys and inspectors of the International Atomic Energy Agency (IAEA),” the Iranian president added.

In its latest measures against Iran, the US House of Representatives on Wednesday approved a bill to impose tougher sanctions on Tehran’s oil exports and other economic sectors.

Tehran has categorically rejected the nuclear accusations, arguing that as a signatory to the Non-Proliferation Treaty and a committed member of the IAEA, it is entitled to develop nuclear technology for peaceful purposes.

Kim, for his part, said Tehran and Pyongyang are both fighting in the anti-imperialism front and therefore North Korea considers Iran’s victories as its own.

Describing the right to peaceful nuclear energy as Iran’s inalienable right, Kim said the West and the US want to deprive independent countries of their rights.

The North Korean official also called for the expansion of bilateral relations between Tehran and Pyongyang.

The meeting took place after a ceremony, during which Leader of the Islamic Revolution Ayatollah Seyyed Ali Khamenei officially endorsed Rohani for a four-year term in office as Iran’s new president.

Kim arrived in Tehran on Saturday to attend Rohani’s swearing-in ceremony, which will be held in Majlis with the participation of Iranian officials as well as foreign dignitaries.