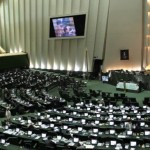 A view of Iran Majlis

A senior Iranian MP says any decision to increase ties with Britain would require the parliamentary approval after the British Foreign Secretary called for improving of relations with Iran.

British Foreign Secretary William Hague called Iranian Foreign Minister Ali Akbar Salehi on Wednesday saying he wants to meet his Iranian counterpart on the sidelines of the annual meeting of the United Nations General Assembly in New York in September.

Hague’s move followed his remarks addressed to the British parliament’s Foreign Affairs Committee last month where he said London is ready to improve ties with Tehran “on a step-by-step basis”.

However, deputy chairman of Iranian parliament’s National Security and Foreign Policy Mansoor Haqiqatpoor says that any such decision lies with Iranian MPs.

Haqiqatpoor added the parliament will only examine and make such ratification if Britain plotting against Iran.

“Britain, just like any other country, can enjoy a friendly relation with Iran based on mutual respect if it stops hatching plots against the Islamic revolution in Iran,” he said.

Britain unilaterally recalled its diplomatic staff from Iran and closed its embassy in Tehran on November 30, 2011.

The move followed Iranian MPs vote three days earlier to downgrade ties with London over its hostile move to sanction the Central Bank of Iran, over unfounded allegations that Iran was leading a non-civilian nuclear program.