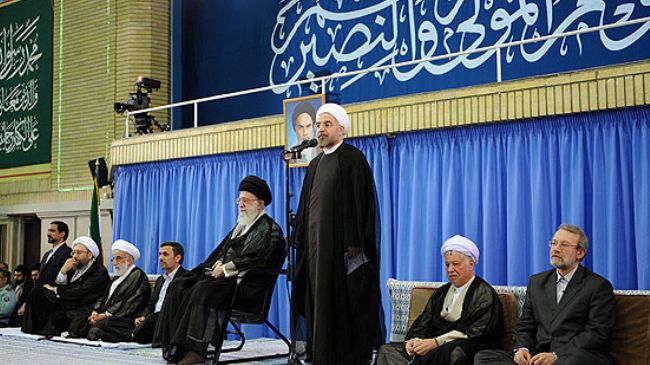 Iran’s President Rohani calls for focus on rule of law

Iranian President Hassan Rohani says the country needs “national resolve to distance itself from extremism in policy-making and management” as well as to focus on the rule of law.

“The dialogue that won the majority vote in the election was moderation,” Rohani said at his endorsement ceremony on Saturday.

Rohani added that moderation is the characteristic of Iranian-Islamic culture.

“Moderation does not mean moving away from principles and conservatism against change,” the Iranian president added.

Rohani said the June 14 election proved that democracy has been institutionalized in Iran and that the country enjoys necessary stability and peace.

Rohani added that the June 14 election decreased social and political gap inside the country and strengthened national unity as well as the Islamic Republic’s regional and international standing.

“The joy resulting from this trust [of the people] created a new social wealth for Iran that not only repelled various … threats from the country but also created new opportunities for [taking] a leap towards the country’s progress,” the president said.

Rohani said the administration’s strength lies in reinforcing its social standing among the people and keeping promises that it has made which “requires fidelity and honesty towards the people.”

Leader of the Islamic Revolution Ayatollah Seyyed Ali Khamenei endorsed Hassan Rohani for a four-year term in office as Iran’s new president in a ceremony on Saturday.

The president’s swearing-in ceremony will be held on Sunday with the participation of Iranian officials as well as foreign dignitaries.

Rohani will take the oath of office in Majlis on Sunday. He succeeds Mahmoud Ahmadinejad, whose two legally allowed consecutive terms end on Saturday.