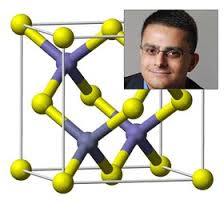 From solar cells to optoelectronic sensors to lasers and imaging devices, many of today’s semiconductor technologies hinge upon the absorption of light. Absorption is especially critical for nano-sized structures at the interface between two energy barriers called quantum wells, in which the movement of charge carriers is confined to two-dimensions. Now, for the first time, a simple law of light absorption for 2D semiconductors has been demonstrated.

Working with ultrathin membranes of the semiconductor indium arsenide, a team of researchers with the US Department of Energy (DOE)’s Lawrence Berkeley National Laboratory (Berkeley Lab) has discovered a quantum unit of photon absorption, which they have dubbed “AQ,” that should be general to all 2D semiconductors, including compound semiconductors of the III-V family that are favored for solar films and optoelectronic devices. This discovery not only provides new insight into the optical properties of 2D semiconductors and quantum wells, it should also open doors to exotic new optoelectronic and photonic technologies.

“We used free-standing indium arsenide membranes down to three nanometers in thickness as a model material system to accurately probe the absorption properties of 2D semiconductors as a function of membrane thickness and electron band structure,” said Ali Javey, a faculty scientist in Berkeley Lab’s Materials Sciences Division and a professor of electrical engineering and computer science at the University of California (UC) Berkeley.

“We discovered that the magnitude of step-wise absorptance in these materials is independent of thickness and band structure details.”

Javey is one of two corresponding authors of a paper describing this research in the Proceedings of the National Academy of Sciences (PNAS). The paper is titled “Quantum of optical absorption in two-dimensional semiconductors.”

“This provided us with ultrathin membranes of indium arsenide, only a few unit cells in thickness, that absorb light on a substrate that absorbed no light,” Javey said. “We were then able to investigate the optical absorption properties of membranes that ranged in thickness from three to 19 nanometers as a function of band structure and thickness.”