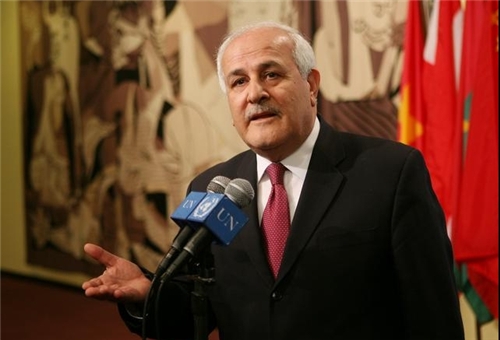 TEHRAN (FNA)- Palestinian representative to the UN Riyad Mansour said Israel is committing “war crimes” and “terror” against his people.

Addressing the monthly meeting of the UN Security Council on the situation in the Middle East, Mansour said that that Israel continues to build in the West Bank, confiscating land, clearing land, removing residents from their land, and supporting extremists who commit “terror” against Palestinians in the West Bank, Al-Alam reported.

Mansour said although the Palestinian leadership had not set preconditions to resume negotiations, the basis for any talks would be the “67 borders, Jerusalem (al-Quds) as the capital of Palestine and solving the refugee problem”.

“Israel speaks of negotiations without preconditions, but sets conditions on the ground. Settlements are the main obstacle to peace …,” he said.

Mansour also praised the EU’s decision to prevent financial grants to Israeli entities located beyond the Green Line, defining it as a move that helps peace.