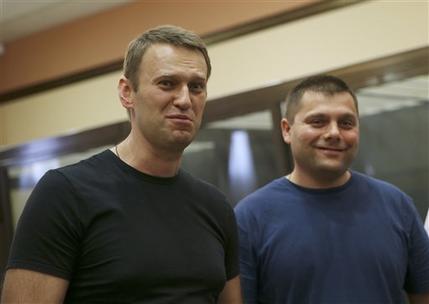 MOSCOW (AP) — Russian opposition leader Alexei Navalny has returned to Moscow after his surprise release from jail and says he will push forward in his campaign to become mayor of the Russian capital.

Navalny was sentenced to five years in prison on an embezzlement conviction on Thursday in the city of Kirov, but prosecutors unexpectedly asked for his release the next morning. They said that keeping him behind bars during the appeals process of his conviction would deprive him of his right to run for office.

A day before the conviction, Navalny was registered as a candidate for the Sept. 8 mayoral election.

Hundreds of police blocked Navalny supporters from the platform of the Moscow railway station where his overnight train from Kirov arrived on Saturday morning.