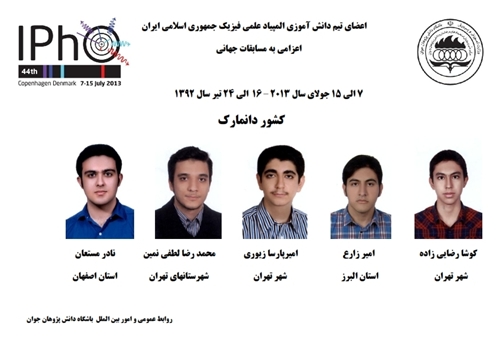 Iran does trading with over 150 countries despite sanctions

Iran has done business and trading with 158 countries in non-oil sections in the first three months of Iranian calendar year (started on March 21), despite sanctions targeting the country’s industry.

Secretary-general of Iranian Auto Parts Manufacturers Association Sasan Ghorbani rejected some reports that Renault has suspended its activities in Iran, stressing that the French auto manufacturer company does continue its presence in Iran.

Prime Minister Benjamin Netanyahu said Sunday that the need to “intensify” pressure and prepare a “credible military option” against Iranover its nuclear program was more important than ever, as world powers prepared to meet in Brussels mid-week to deliberate the possibility of renewing talks with Tehran.

Iran’s President-elect Hassan Rohani says expansion of relations with African countries has always been significant for the Islamic Republic.

Iran’s President-elect Hassan Rouhani and Tunisian President Moncef Marzouki, in a phone conversation, discussed the latest developments in Egypt, underlining that national dialogue is the only way to meet the demands of the Muslim nation.

French senator calls for reconsideration of sanctions on Iran

Chairman of the Finance Committee of the French Senate Philippe Marini has called on the Western countries to reconsider their embargoes against Iran over its nuclear energy program.