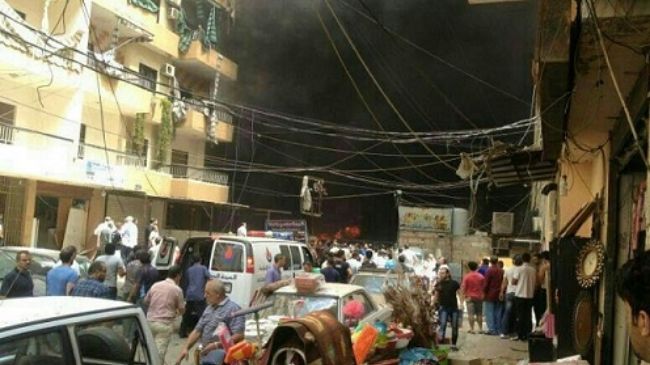 A loud explosion has been heard in the southern suburbs of the Lebanese capital Beirut, leaving at least 53 people injured.

The blast occurred in the suburb of Bir al-Abed on Tuesday, sending black smoke billowing into the sky and causing reportedly heavy damage.

Several cars and buildings were on fire in the wake of the blast.

A witness living near the blast scene said that “They want to terrorize us. … These terrorists want us to abandon (the leader of Hezbollah) but we swear we will love him more, for all our lives. All we own, and our children we pledge to him.”

On the same day, a man was injured after Lebanon’s Interior Ministry guards fired in the air to disperse protesters who had assaulted the minister, Marwan Charbel, during his visit to the site of the explosion.

Lebanon’s Caretaker Prime Minister Najib Miqati has condemned the attack, saying it was meant to foment unrest in Lebanon.

Meanwhile, a Hezbollah lawmaker Ali Ammar issued a statement saying that “There is a clear fingerprint of Israel and its instruments in this dastardly deed.”

The bomb attack is the second strike to hit southern Beirut this year.

In January, two people were injured after a bomb went off in the suburb of al-Selloum, south of Beirut. The bomb was planted underneath a car belonging to a member of the Lebanese resistance movement of Hezbollah.

Back in May, two rockets hit the area. Also, Lebanese security forces have disarmed several rockets near Beirut in recent months.

In December 2012, a car bomb attack in the capital claimed the life of the intelligence chief of Lebanon’s Internal Security Forces, General Wissam al-Hassan.