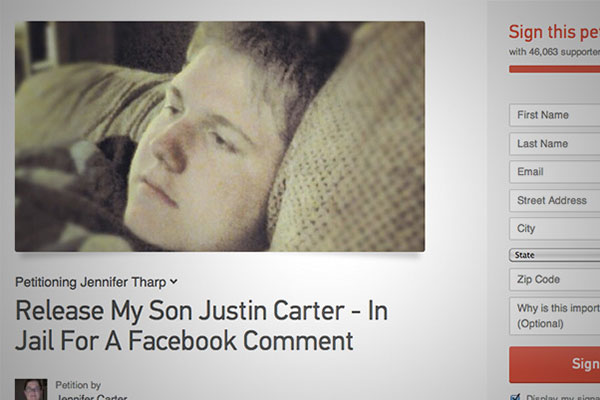 TEHRAN, July. 9 (MNA) – Justin Carter, now 19 years old, has to spend at least 8 years behind bars for a comment he posted on an online social network. His parents have launched a campaign to release him, however it is unlikely that the former high school student can get rid of the sentence anytime soon.

“Free Justin Carter” is the petition launched in March in the US to help release a 19 year-old who was arrested for a Facebook comment.

The story began when about 5 months ago over a Facebook dispute Justin carter was called crazy and messed up in the mind; Justin replied sarcastically: “Oh yeah, I’m real messed up in the head, I’m going to go shoot up a school full of kids and eat their still, beating hearts.”

The comment was posted a few months after the Sandy Hook school shooting and reported by a woman to the police, leading to immediate arrestment of Justin. Justin’s parents said the comment was only a joke between a few teenagers and demanded the release of their son. They said Justin is under suicide prevention care as he thinks he will never be released from the prison.

A court in the US accused Justin of terrorist threatening and sentenced him to 8 years in Jail. Justin’s parents said the comment was followed by JK (Just Kidding) and LOL (Laugh Out Loud) both known as signs of joking among Facebook users. However, US judicial authorities did not accept the excuse and said Justin has to serve in prison for now.

The Carters believe even if Justin is proved to be guilty, the sentence is too big for his crime. The court has demanded a 500 thousand-dollar bail which according to Carter family this is multiple times more than normal bails for prisoners accused of murder.

Jack Carter, Justin’s father who started the petition says he wants to inform teenagers of dangers which threaten them.

This is not the first time that an American is arrested for a Facebook comment, however, a sentence of 8 years in prison for a Facebook post has been unprecedented.  In the Spring another teenager was arrested by US security forces in Massachusetts over a Facebook comment and was accused of bomb threat, but the court finally decided the comment was just a part of a song.

After Justin’s story attracted the attention of media, Christian Monitor dedicated a special report to Justin’s case where some legal experts criticized the sentence.