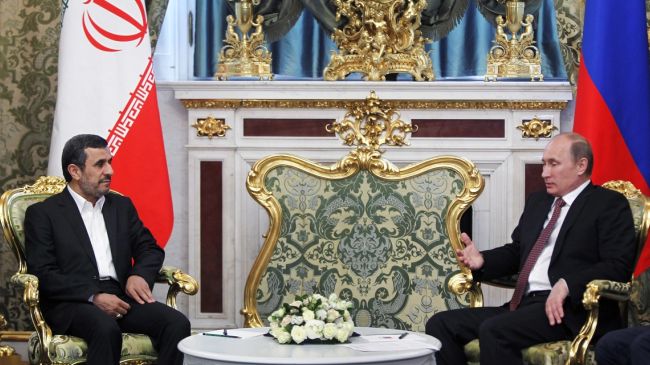 Iran’s President Mahmoud Ahmadinejad (L) and his Russian counterpart Vladimir Putin meet in the Kremlin in Moscow on July 2, 2013.

Iran’s President Mahmoud Ahmadinejad has called for the finalization of heads of agreements Tehran and Moscow have already signed to expand oil and gas cooperation.

“Iran and Russia are the world’s leading gas exporters. On this basis, cooperation and coordination between the two countries in these two sectors will benefit Iran and Russia and the global energy market,” Ahmadinejad said in a Tuesday meeting with his Russian counterpart Vladimir Putin in the Kremlin.

The Iranian president added that that Tehran and Moscow have agreed to maximize their economic cooperation.

Ahmadinejad further said that the Bushehr nuclear power plant is a symbol of “constructive cooperation” between Tehran and Moscow, adding both sides can develop this model and construct new power plants.

He added that preliminary talks have been held with Russian officials on the construction of new power plants.

In September 2011, the Bushehr nuclear power plant officially began its operations, generating electricity at 40 percent of its capacity.

The plant was originally scheduled for completion in 1999. However, the project was repeatedly delayed by the Russian side due to intense pressure exerted on Moscow by the United States and its Western allies.

The Bushehr plant, which is operating under the full supervision of the International Atomic Energy Agency (IAEA), reached its maximum power generation capacity for the first time on August 30, 2012.

The Russian president, for his part, welcomed further cooperation between the two sides and stressed that the two countries should also strengthen their ties in the fields of science and technology.

He added that Iran and Russia both sit atop huge gas resources and share interests, calling for enhanced trade exchanges between the two countries.

Ahmadinejad was in Moscow to attend the 2nd Summit of the 13-nation Gas Exporting Countries Forum (GECF).