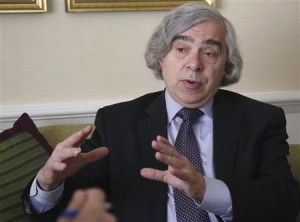 (Reuters) – The top U.S. energy official said he believed the oil market could cope with any further reduction of Iran’s oil exports from the tightening of sanctions on Tehran over its nuclear program.

U.S. Energy Secretary Ernest Moniz also said on Sunday he expected a “fair amount of action” by his department in 2013 in evaluating applications by U.S. firms to export natural gas.

Companies hoping to ship gas abroad have been frustrated by lengthy delays and rule changes as they await Department of Energy approval of their applications.

“I’m planning to go through them as rapidly as I can,” Moniz said in an interview in Vienna.

As for Iran, U.S. lawmakers are embarking this summer on a campaign to deal a deeper blow to its diminishing oil exports, and analysts say the ultimate goal could be a near total cut-off.

This could risk antagonizing China and India, the biggest remaining buyers of Iranian crude, and could push oil prices higher in a hit to the global economy.

Moniz said Iranian exports were not now a “dominant player in the market”, and was offset by increased production in the United States and in Iraq as well as substantial reserve capacity in some of the major OPEC producers such as Saudi Arabia.

“So I would think that with further sanctions, the markets could be quite resilient to that,” said Moniz, who took office last month. From a technical point of view, “we can certainly manage a further reduction of Iranian exports”, he added.

U.S. and European Union sanctions aimed at choking the flow of oil money into Iran and forcing Tehran to negotiate curbing its controversial nuclear program slashed its crude exports to 700,000 bpd in May, the lowest in decades, according to industry sources and tanker-tracking data.

But crude prices are still lower than they were a year ago.

Iran says its nuclear program is a peaceful bid to generate electricity. But Washington and its allies suspect Tehran is seeking the capability to make nuclear weapons.

Both parties in the U.S. Congress are pressing for tougher sanctions, betting that a resurgence in U.S. oil output and signs of ample global supply will prevent prices from rising.

Moniz said there was “quite a bit of potential for increased production to offset any further reduction” of Iranian exports.

Last week, U.S. President Barack Obama included a robust endorsement of natural gas use around the world as he sought to revive his stalled climate change agenda.

But how much the United States will supply remained unclear as more than a dozen companies await approval to sell excess gas to countries such as India and Japan, where it will fetch higher prices than in the domestic market.

“I’ve committed to start that process expeditiously, and I certainly expect to have substantial numbers of that (evaluation of export license applications) this year,” Moniz said.

The surge in shale gas production has helped make the United States a leading natural gas producer and potentially a major exporter. But some manufacturers and lawmakers have warned that a rapid push to export LNG could lead to a rise in U.S. gas prices and harm consumers and energy-intensive industries.

Moniz said applications would be handled on a case-by-case basis and suggested he would not change the order in which his department rules on applications – a policy made in midstream that put some players at a disadvantage.

“My intent is to move forward with the queue as it is spelled out,” he said, making clear he did not agree with a major LNG trade group, which said it was unlawful. “Our lawyers feel it is certainly completely rational.”

If the Department of Energy waits about two months between each export decision, as Acting Assistant Secretary for Fossil Energy Christopher Smith has signaled, projects near the end of queue might not get a DOE permit before late 2015.

Asked if this was a realistic timetable, Moniz said: “I would not say it’s not unrealistic. But maybe we can do it faster.”