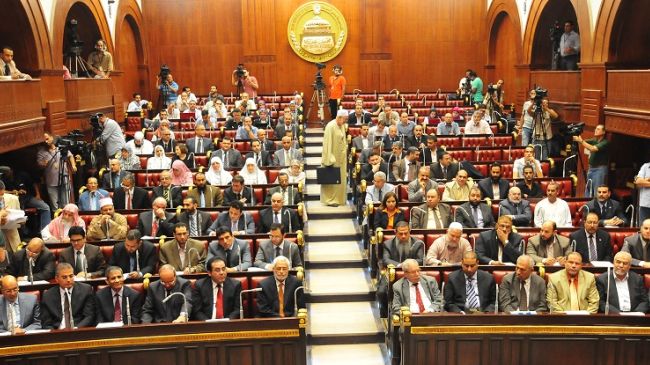 Members of the Egyptian Shura Council attend a meeting in Cairo.

Nine secular Egyptian MPs have resigned from the acting parliament ahead of Sunday’s demonstrations against President Mohamed Morsi.

The MPs said on Saturday that they had resigned from the Shura Council, the upper house of Egyptian bicameral parliament, in support of the Egyptian people, Ahram Online reported.

The Shura Council took over legislative duties after parliament was dissolved in June 2012 by the Supreme Council of the Armed Forces (SCAF), the country’s then ruling military council.

According to Shura Council speaker Ahmed Fahmy, a number of other MPs also reigned but their resignations are yet to be accepted.

He acknowledged that he had made some mistakes during his first year in office but called for national reconciliation, saying that he was open to cooperating with the opposition on constitutional reform.

The NSF claimed that Morsi had failed to take responsibility for the country’s deep political polarization and failed economy.

The opposition group Tamarod (Arabic for Rebellion) has called for mass demonstrations on Sunday, which marks Morsi’s first year in office, to demand his resignation and early presidential elections.

Several political groups say the government is dominated by the Muslim Brotherhood. The opposition also accuses Morsi of deviating from the 2011 revolution that toppled the Western-backed regime of former Egyptian President Hosni Mubarak.

Morsi’s supporters, however, say the president is cleansing Egyptian institutions of corruption but he needs time to realize the ideals of the 2011 revolution.

“We gave them a chance to lead a reconciliation but they didn’t. The resignation comes to support the popular trend in Egypt,” said MP Mona Makram Ebeid, who resigned on Saturday.

Ihab al-Kharatt, the head of the human rights council at the Shura Council, said some 22 deputies had quit.

“We resigned in support of 22 million Egyptians who withdrew their confidence from Morsi,” Kharatt stated, referring to a petition launched by the opposition group Tamarod which says it has gathered 22 million signatures to demand Morsi’s ouster and a snap presidential election.