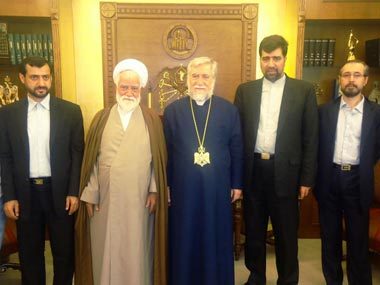 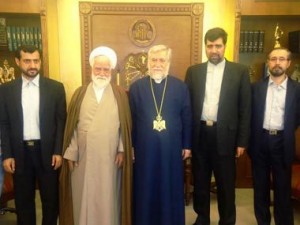 Catholicos of the Great House of Cilicia, Aram I appreciated Iran’s support for the Armenian people in the Karabakh issue and the Armenian Genocide recognition at a meeting with the representative of the Iranian Supreme Leader, Tehran-based Armenian newspaper Alik reported.

According to the newspaper, Catholicos Aram I received Iranian Supreme Leader’s adviser Gholam Ali Naimabadi on June 25. Iran’s ambassador to Lebanon Ghazanfar Roknabadi was also present at the meeting.

Naimabadi conveyed the good wishes of Iran’s Supreme Leader Ayatollah Ali Khamenei and expressed his appreciation about the relations between Iran and the Catholicosate of the Great House of Cilicia as well as about Iranian Armenians.

Referring to the Armenian community of Iran, Ayatollah Naimabadi mentioned the positive attitude of Imam Khomeini and Ali Khamenei to Armenians.

The two also discussed regional developments, in particular the situation in Syria and Lebanon. Catholicos Aram I appreciated Iran’s support for the Armenian people in the Karabakh issue and the Armenian Genocide recognition.