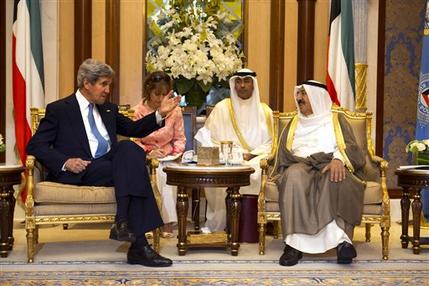 Kerry in Kuwait for talks on Syria, Iran

KUWAIT CITY (AP) — U.S. Secretary of State John Kerry is making his first visit to Kuwait as America’s top diplomat, having talks with the tiny, oil-rich country’s leader about deepening violence in Syria, Iran’s new president and prospects for peace in the Mideast.

Kerry is meeting Wednesday with Kuwait’s emir, Sheik Sabah Al Ahmed Al Sabah, during a stop on his two-week trip through the Mideast and Asia.

Kuwait, which has joined other Gulf nations in backing Syrian rebels fighting Syrian President Bashar Assad, is the hub for the U.S. military’s main ground force in the region, a key part of the Pentagon’s counterbalance with Iran.

The country is scheduled to have parliamentary elections next month amid growing turmoil between the opposition and the ruling family.