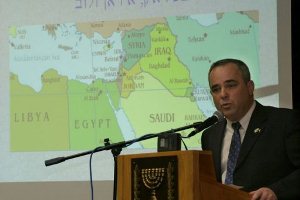 ‘Israel has every right to defend itself against Iran’

Yuval Steinitz, stands in front of a map of the Middle East as he speaks to the press March 28, 2004, in Jerusalem.

Strategic Affairs Minister Yuval Steinitz supported Prime Minister Binyamin Netanyahu’s latest claim that Israel has every right to defend itself against Iran, during an interview with Channel 2 News.

“We will never agree to give up our right to defend ourselves,” Steinitz declared, “it is in the DNA of Netanyahu and the state of Israel.”

“Even (US President Barack) Obama has emphasized Israel’s right to defend itself,” he added.

Steinitz’s comments come in reaction to the outcome of the recent presidential elections in Iran which saw moderate Hassan Rohani emerge as the winner.

Rohani’s victory has prompted cautious optimism from Western powers, an optimism which Netanyahu has strongly warned against.

The former finance minister echoed Netanyahu’s warning saying, “Rohani wrote a book…where he explains how to be a wolf in sheep’s clothing.”

Beyond expressing his views on Iran, Steinitz expressed his hope that recent efforts to kick-start stalled peace talks with the Palestinians may bear fruit.

“I hope that he (PA President Mahmoud Abbas) will come to the table without any tricks up his sleeves or preconditions, with the intention of opening a dialogue with us for the next year or so,” he said.

Netanyahu has called on Abbas in recent weeks to begin a new round of talks without preconditions, a call that Abbas has so far refused, citing the necessity for Israel to first accept east Jerusalem as the capital of a future Palestinian state.

While some Knesset members, such as Steinitz have praised Netanyahu’s recent efforts, others have questioned his sincerity.