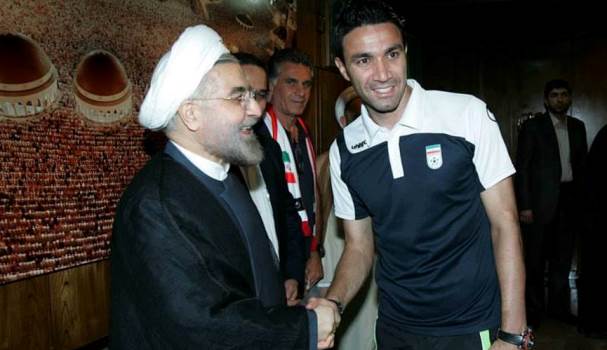 Iran’s President-elect Hassan Rohani says the next administration will offer full support to the national soccer squad after it managed to earn a berth in the FIFA 2014 World Cup in Brazil.

In a meeting with the members of the national team in Tehran on Wednesday, Rohani congratulated the players on their victory against South Korea and their qualification for the 2014 World Cup.

On Tuesday, Iran’s national soccer team blanked South Korea on its home turf 1-0, thanks to a solo by forward Reza Quchan-Nejad, and finished 1st with 16 points in Group A of the Asian World Cup Qualifiers.

Rohani said the next administration would spare no effort to support the team, adding it has plans to promote sports in society.

The newly-elected president said the team’s victory against South Korea further added to Iranians’ joy and happiness after they celebrated his win in the presidential election.

He stated that soccer has a special status among the Iranian people.

“Today, sports, particularly soccer, are closely intertwined with the Iranian people’s culture and … have something to do with our national unity. They have also turned into a social necessity and a feeling of national pride,” Rohani said.

He expressed hope the national soccer squad would secure “a good position” in the 2014 FIFA World Cup.

Iran, South Korea, Japan, and Australia are the four Asian teams that have qualified for the 2014 FIFA World Cup.