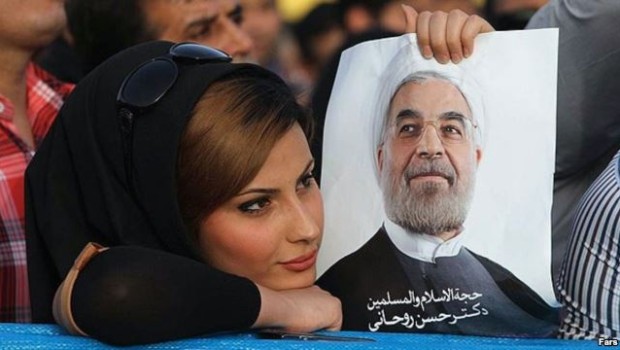 Iran today: Can the moderates and reformists win the election?

On Tuesday, after days of bargaining and manoeuvres — notably the interventions of former Presidents Mohammad Khatami and Hashemi Rafsanjani — the announcements finally came: moderates and reformists would unite behind a single candidate, Hassan Rouhani, in Friday’s first round of the Iranian Presidential election.

Rouhani, a senior official in the Expediency Council and former lead nuclear negotiator, was given a clear run when reformist Mohammad Reza Aref withdrew following deliberations of a 10-person committee.

Now the bigger challenge, 48 hours before the ballot: can the moderate-reformist coalition, facing three leading principlists who are close to the Supreme Leader, mobilise enough support to put Rouhani into the two-candidate run-off on 21 June?

Four years ago, an unexpected surge did just that for Mir Hossein Mousavi, before he lost to President Ahmadinejad amid claims of regime manipulation of the final vote. However, there is a key difference in 2013, as an EA correspondent in Iran explains:

There is a lack of excitement, especially compared to the last election.

Many people are still not ready, after the experience of 2009, to put all their eggs in Rohani’s basket. He is still not identified as a reformist candidate, and he did not jump to the rescue of Mousavi and [reformist and 2009 candidate] Mehdi Karroubi when they were put under house arrest in 2011.

Undoubtedly, Rafsanjani’s and Khatami’s interventions will persuade some people, but how many?

EA WorldView believes that Rouhani may make it into the run-off — if the first-round vote is not manipulated to block him — alongside Tehran Mayor Mohammad-Baqer Qalibaf.

However, he then faces the biggest challenge of all. Given that the three leading principlists — Qalibaf, Ali Akbar Velayati, and Saeed Jalili — are likely to poll more than 50% between them in the first round, how can Rouhani find a majority to win the final vote?

The outcome has been that only one of these gentlemen remains in the race. I think that Mr. Aref, with his worthiness, did a great thing, a great sacrifice. And now, I think that with the presence of Mr Rouhani in the race, all of us must put laxity aside and wholeheartedly enter the scene and participate in the election. My message to my dear people and especially to reformists, and to those who seek change, is that God willing we’ll have a good election.

The opposition Iran Green Voice website claims, from a Central Bank memo, that officials are trying to deal with a currency crisis by prohibiting transfers to Iran’s Free Trade Areas.

Iranian media are reporting the deaths of several members of the Islamic Revoutionary Guards Corps in the Syrian conflict.

Ali Asqar Shanaei, Mehdi Khorasani, and Hossein Attari are said to have died while supporting the “defenders of the Sayyeda Zeinab shrine” in south Damascus.

Last month, the leader of Lebanon’s Hezbollah, Hassan Nasrallah, justified the involvement of his fighters in the Syrian conflict by invoking the defence of the shrine. Hezbollah’s men subsequently played a key part in the Syrian regime’s capture of the strategic town of Qusayr near the Lebanese border.

The Revolutionary Guards have said they are providing logistical and advisory support for Damascus, but have denied the involvement of their troops in fighting.

Conservative Worry About Divided Vote Among Their Candidates

As moderates and reformists try to mobilise behind Hassan Rouhani, some conservatives are fretting that they are dividing their votes between three leading challengers — Mohammad Baqer-Qalibaf, Ali Akbar Velayati, and Saeed Jalili.

Seyyed Reza Taghavi, the head of the Policymaking Council for Friday Prayer Leaders, said on Tuesday that both the Society of Seminary Teachers of Qom and the Combatant Clergy Association “tried so hard to unite these conservative parties”:

We did not support any one candidate; we simply tried to promote unity between the different groups. We tried to prevent a dispersion of the votes among these candidates.

More than 60%, we were successful in this way. Most of the candidates who wanted to take part in the elections changed their minds and did not register to enter the race.

The conservative challenge to get two of their men into the run-off may be further complicated by the involvement of Mohsen Rezaei, a former commander of the Revolutionary Guards, in the first round.