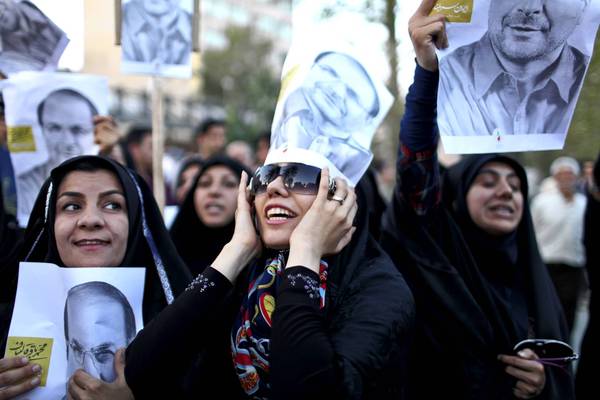 Iran presidential race down to choice of 2 conservatives

Regardless of whether nuclear strategist Saeed Jalili or Tehran Mayor Mohammed Baqer Qalibaf wins, Iran will remain in the hands of hard-liners.

TEHRAN — When Iranians go to the polls Friday, they will bid an unceremonious farewell to Mahmoud Ahmadinejad, the populist with the zip-up windbreaker who ran afoul of supreme leader Ayatollah Ali Khamenei, even as he became Iran’s provocative face to the world. But the voters will be casting ballots with scarcely a hint of the reformist spirit that swept the country four years ago and ended in a bloody crackdown.

Considering the front-runners in Iran’s presidential race, it seems likely that, no matter who wins, the nation will drift further into the grip of Islamist hard-liners and remain defiant in stoking regional hostilities and pursuing a nuclear program that has drawn stiff economic sanctions from the U.S. and Europe.

Much of the drama was siphoned from the race last month when the Guardian Council, a powerful conservative panel that vets candidates for the presidency, eliminated two politicians with broad appeal: Ali Akbar Hashemi Rafsanjani, a former president and a leader in the 1979 Islamic Revolution, and Rahim Mashaei, a top aide to Ahmadinejad.

The election is likely to be decided between Saeed Jalili, a chief nuclear strategist and Khamenei protege, and Mohammed Baqer Qalibaf, the mayor of Tehran. Both are conservative and pro-clergy. Their ascendancy — permitted by imams and the powerful Revolutionary Guard — suggests the country will not ease up on dissenters and is little inclined toward international detente, especially with Washington.

Both candidates, Jalili in particular, stand as counterpoints in a region that in the last two years has demanded political change. Iran has been concerned over the popular uprisings that brought down autocrats in Egypt, Libya, Tunisia and Yemen. And Khamenei has carefully orchestrated an election that hews to religion, nationalism and the imprint of his authority.

Independent polling centers do not exist in the Islamic Republic. Various Iranian news agencies say Jalili and Qalibaf are the front-runners. The state-run Jam news agency puts Qalibaf in a slight lead with 32.7% of the votes to Jalili’s 28.7%. Other polls suggest Jalili may have the edge.

Jalili, a graying veteran of the Iran-Iraq war who wears a prosthetic leg, is a fierce ideologue and theocrat. Qalibaf, usually seen in tailored suits and carrying an iPad, has sought to play down his careers as an air force commander and national police chief, recasting himself as an urbane moderate who can fix Iran’s inflation and deep economic problems.

“The president should be hands-on, not a man of theory,” Qalibaf said in a recent interview with state TV. “People do not need slogans and promises. They need deeds and keeping promises.”

Qalibaf has built sidewalks, introduced the first public toilets in the Iranian capital and dealt with a rat problem on one of Tehran’s busiest streets. In a recent spirited TV debate, he defended the “domain of private living,” saying the government, with its relentless security services, should not interfere in people’s lives.

That does not sound like the man who lauded his military credentials when he ran unsuccessfully against Ahmadinejad in 2005. He boasted in a TV interview during that campaign about his role in the crackdown on student protests that rocked Iran in 1999. His aides said he was misquoted. But that same year Qalibaf, nicknamed by activists as the “club-wielding thug,” signed a letter warning then-President Mohammad Khatami that he would be ousted unless he crushed demonstrations.

But many Iranians these days are worried about jobs and opportunities. “Qalibaf is the best one to run the country,” Arash Mohammadi, a 27-year-old Tehran resident, said at a recent rally. “He can fix the economic mess.”

The middle class and “educated people do not like Saeed Jalili as he has traces of too many prostration marks on his forehead,” said Rahim Amiri, 55, a clerk in a Tehran-based insurance company, referring to the discolored bump on the forehead from diligently performing Muslim prayers.

Qalibaf appears to have backing from bureaucrats and several top-ranking Revolutionary Guard officials. Jalili has wide support among hard-line conservatives, lower- and middle-rank Revolutionary Guards, and the ominous Basiji militia.

Jalili has portrayed Qalibaf and other less politically rigid candidates as “compromisers” who would make concessions to the West. Qalibaf, perhaps because he’s angling to straddle the conservative and moderate spectrum, has not announced his stand on talks with the international community over Iran’s nuclear program, and has been reticent on the controversial issue of “compromise or resistance” to Western demands that the program be scaled back.

Jalili entered the stadium wearing a cream-colored shirt flowing over his hips, a casual outfit often worn by Basiji members. The audience roared “Death to compromisers” and “Our winning card is our living martyr.” That last term referred to Jalili’s loss of his right leg in the Iran-Iraq war in the 1980s.

Jalili has sought to further burnish his hard-line rhetoric by ridiculing Qalibaf’s calls for family planning and birth control to stem the country’s burgeoning population. Jalili’s campaign says such measures go against Islam and contradict the teachings of supreme leader Khamenei.

Jalili managed Khamenei’s office from 2001 to 2005, when he became an advisor and later deputy foreign minister to Ahmadinejad. Unlike Ahmadinejad, who amassed a measure of power that irritated the clerical establishment, Jalili has remained close to Khamenei. The supreme leader is the final authority on Iran’s nuclear program and defiant foreign policy.

“For us, as fans of Jalili,” said Mohammad Amin Taei, a 19-year-old student, “the ideological war and being victorious in it is more important than economic justice.”

But even amid diatribes and ideology, the politics of a presidential election is often rooted in local issues.

Qalibaf handed out fliers recently at a hip Tehran cafe. One brochure featured a testimonial from a once-obese woman who noted that new exercise equipment given to her neighborhood by Qalibaf’s administration helped her lose weight.

The cafe’s owner, who asked that his name not be used, also expected to benefit. Qalibaf campaign workers promised to repair the broken pavement outside the cafe for free if the owner allowed them to promote their candidate amid the espressos and lattes.