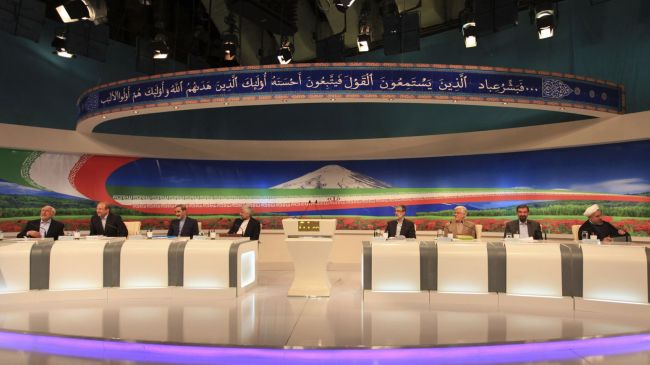 Iran presidential candidates have outlined their social and cultural policies in the second round of live debates aired by Iran’s national broadcaster.

Independent candidate Mohsen Rezaei was the first to outline his policies in the Wednesday debate, saying Iranian society is currently in dire need of social and cultural reform.

Rezaei censured the ongoing economic injustice in the country, stressing that it is the main cause of social and cultural problems in Iran.

Reformist candidate Hassan Rohani focused on the importance of security by saying that creativity dies in the absence of social security. He added that the next administration must employ cultural figures and make use of their ideas and suggestions in order to resolve cultural problems.

President of the Center for Strategic Research of the Expediency Council further stated that for culture to flourish all Iranian citizens, including writers and artists, must feel respected

The next contender, former First Vice President Mohammad Reza Aref said the next administration must not sway exclusive control over national cultural affairs and let people manage such affairs.

Aref emphasized that the next administration must provide the infrastructure for cultural affairs and allow people to take care of the rest.

He added that there are ample grounds for creativity and innovation in the country, noting that the way should be paved for such activities.

Principlist candidate Ali Akbar Velayati, for his turn, said cultural education must begin in families and from early school.

The former foreign minister further emphasized that cultural issues must not be politicized in the country.

He said the role of the culture in politics, economy and social issues has been undermined, and vowed to uplift that role if elected president in the June 14 election.

Gharazi emphasized that the forthcoming administration should be at the helm whenever cultural issues are concerned.

Lawmaker Gholam-Ali Haddad-Adel deplored the lack of job security in the country and said it was the main concern for Iranian artists and writers.

He also stressed the significance of independence in cultural activities, adding, “If we are not independent in the field of culture, then we will not be independent in politics, economy or other sectors.”

The principlist candidate said, “Culture can be compared to a waterfall in the society, and it must encompass all people from different walks of life.”

Secretary of the Supreme National Security Council Saeed Jalili stated that culture is interwoven with politics and economy.

He added that culture is actually the breeding ground that can help to develop other sectors of the society such as economy, politics and so forth.

“If we make proper use of this capacity, it will bring more power to many categories and, for example, strengthen our laws,” he noted.

The first presidential debate was aired live on Iran’s state TV on May 31, during which the eight candidates talked about their economic plans, offered their solutions to the country’s economic problems and answered questions on major economic issues.

The candidates will attend their last live debate on Friday, which will focus on politics.

On June 14, Iranians will cast their ballots at over 66,000 polling stations across the country in the nation’s 11th presidential election. Expatriates will also be able to vote at 285 polling stations that will be set up in other countries.