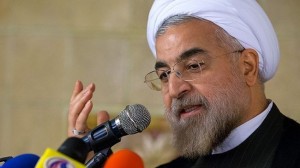 During a televised Q&A session on Thursday, the reformist candidate said under the circumstances, the country has no other option but to boost its soft power capacities through greater public participation, privatization and competitiveness.

According to Rohani, slogans and ideals will get the country nowhere. He said Iran needs flexibility to push forward its agenda and protect its interests.

Rohani added that if he is elected president, his administration will pursue the country’s nuclear energy program.

The presidential candidate also stated that, at the same time, he will find ways to end the Western sanctions through greater interaction, reiterating that this will not happen overnight.

On June 14, Iranians will go to over 66,000 polling stations across the country to cast their votes, while some 285 polling stations will be set up for Iranian nationals in other countries.