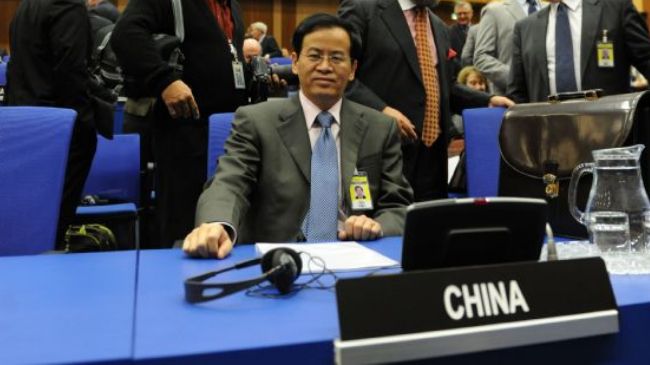 Addressing a meeting of the UN nuclear agency’s Board of Governors in Vienna, Austria, on Wednesday, Cheng said that Beijing is firmly committed to pursuing dialog and negotiations to settle the issue over Iran’s peaceful nuclear activities.

He added that China has been playing a constructive role in resuming talks between Iran and the P5+1 group of world powers and maintaining a diplomatic process in resolving the issue.

“Iranian nuclear issue is complicated and sensitive, time and wisdom are needed to resolve this issue,” the Chinese envoy added.

Iran and the P5+1 group of world powers – Russia, China, France, Britain, and the US plus Germany – have held several rounds of talks, mainly over the Iranian nuclear energy program.

The latest round of negotiations between the two sides was held in Istanbul, Turkey, on May 16. Two earlier meetings were also held in the Kazakh city of Almaty on April 5-6 and February 26-27.

As a permanent member of the UN Security Council and a member state of the P5+1, China has always reaffirmed Iran’s right to use nuclear technology for peaceful purposes and stressed that negotiations and dialog are the right approach to address the dispute over the Islamic Republic’s nuclear energy program.

The West, led by the United States and Israel, accuses Iran of following non-civilian purposes in its nuclear energy program.

Iran has vehemently rejected the allegation, arguing that as a signatory to the Non-Proliferation Treaty (NPT) and a member of the IAEA, it is entitled to develop and acquire nuclear technology for peaceful purposes.