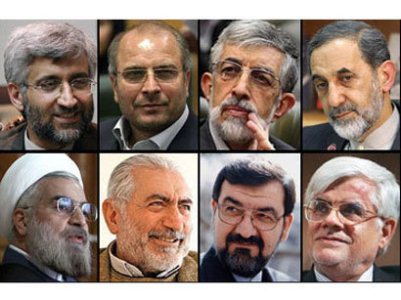 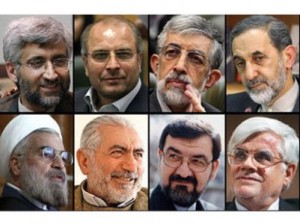 Comments on the economy, sanctions and international relations by the eight candidates in Iran’s June 14 presidential race.

“In fact, the U.S. president is the problem, not Iran’s president.” – In response to a question about the nuclear standoff.

“We have 4 million Iranian envoys in foreign countries and the future government should use this potential to strengthen relations with different states.” – Speaking about Iran’s diaspora.

“The problem of the economy is the conservatives’ domination over it. Interference of some military people and military-affiliated companies in the economy has limited space for participation” – In apparent reference to Revolutionary Guard’s extensive business interests.

“We are not allowed to build a nuclear bomb, both in religious terms and according our views. We can achieve that capability, but we do not consider it beneficial and we will never go after it.” – In reference to religious edict, or fatwa, by Supreme Leader Ayatollah Ali Khamenei against nuclear weapons.

“We are seeking to dry up the roots of the Zionist regime, and the capitalist and communist systems. Instead, we promote the Islamic system. This is the discourse of the Islamic revolution” – in reference to Israel, the West and other nations.

“Regardless of who is elected president in June, uranium enrichment activities will be pursued without fear.”

“The country is not run by talk. It needs wisdom … We had been grappling with mismanagement before we faced sanctions.”

“Part of the financial and administrative corruption is blamed on this outmoded and dilapidated administrative system. We inherited this system several decades ago, before the revolution, and we have never overhauled it.”

“The next government should work hard to settle the people’s economic hardships.”

“Which family today doesn’t have someone who is unemployed? If the administration had a plan, this couldn’t be solved.”

“We can have successful foreign relations and policies and, in that case, we would be able to reduce the sanctions. This is practicable and we will do this.” – In reference to possible greater diplomatic outreach to the U.S. and West.

“We do have a legitimate right to a peaceful nuclear program, but at the same time could also avoid tensions with the West.”