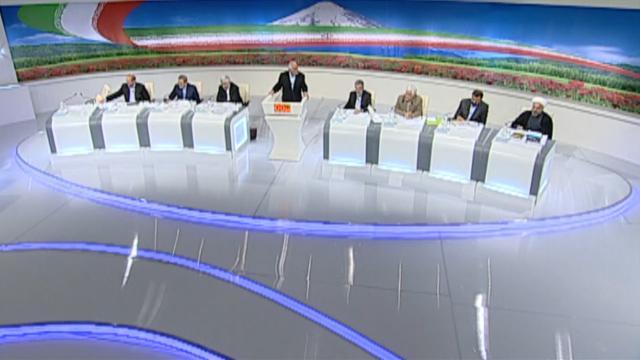 US trying to interfere in Iran’s affairs ahead of presidential poll: Analyst 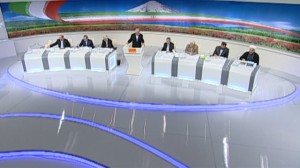 Press TV has conducted an interview with Foad Izadi, a professor at the University of Tehran, over the first televised debate of candidates ahead of June 14th Iranian presidential poll.

Press TV: Generally I am sure, you caught this debate. What were your impressions of how the candidates presented themselves, this debate, the focus being the economy.

Izadi: Well, as you know we have one economist, Dr. Mohsen Rezaei, who is one of the candidates. The others do not have a degree in economics, but based on what we saw today they are prepared to present themselves. We did not see any major mistakes. There were obviously differences in points of view.

As you know we have the two main factions of the reformers present; we have Dr. [Mohammad Reza] Aref who was the first vice president during the [former Iranian President Mohammad] Khatami administration and we have Dr. [Hassan] Rohani who was the secretary of Iran’s National Security Council during the presidency of [Akbar] Hashemi Rafsanjani; and their economic views are more or less in line with each other.

The other candidates varied somewhat in their points of view; we had someone like [former Foreign Minister] Dr. [Ali-Akbar] Velayati is very much in favor of a free market economy. His main economic advisor is actually currently the head of Iran’s Chamber of Commerce.

Dr. [Gholam-Ali] Hadad-Adel who was the speaker of Iran’s Majlis for some time and he is a parliament member, obviously deals with economic issues on daily basis.

The other candidate, Mr. [Mohammad] Gharazi, he was minister of oil during Prime Ministership of Mir-Hossein Mosavi in 1980s in Iran and then he became minister of communications during the presidency of Rafsanjani. He has more middle ground economic view.

So basically, these are the candidates that differ with each other in significant ways on how to fix Iran’s economy and what we saw was basically a presentation of these different points of view.

Press TV: Let’s look at one of the sanctions, Foad Izadi, that the United Sates has decided at this point to lift and it is really interesting, they come out and lift the sanctions on variety of consumer communication devices and they say this is to empower the Iranian people ahead of elections.

What I am curious about is where was the US which is still going on with our patients, in particular cancer patients whose lives are under threat. When we are looking at the US and the US-led sanctions, having the effect that is set on the economy; it decided this time, before the election to have this particular sanction lifted. What intentions does that reflect on the US, when it comes to Iran?

Izadi: I do not have to give you an analysis, we can just refer back to what some US officials have been saying in the last week or so and this latest news about lifting the sanctions on telecommunication devices, basically phones, smart phones and different types of phones and computer systems, basically is a reflection of what we heard in the last two weeks or so.

We have had two hearings in the United States Congress, one about two weeks ago Wendy Sherman who is an assistant secretary of state talked about Iran’s election and talked about finding ways of getting in touch with what she called Iran’s civil society and basically said that US is looking at ways of helping this civil society to communicate with each other more effectively.

Another person that spoke at Congress was A. Elizabeth Jones; she is also an assistant secretary of State, she deals with Middle East issues more [than] Wendy Sherman at political office in the States Department. What Elizabeth Jones said, was basically the same thing.

I think what the US government is trying to do is giving the fact that going back to the 1950s, the US government has had an interest in intervening Iran’s political affairs, starting with the 1953 coup d’ état. They do want to play a similar role. This is a new generation; [Former US President Dwight D.] Eisenhower passed away many years ago and the new generation wants to play her role in terms of intervening in what is going on in Iran and maybe changing or affecting the government if they can and I think this lifting of the sanctions on this telecommunication devices are basically a way of achieving that.

Press TV: This is going to be a fine balancing act that the candidates have to play. Tell us how they are going to be able to that when it comes to foreign policy i.e., the United States; I mean we want Iran, some of the candidates have said, perhaps tell us which ones, that they want to be a player in international scene when it comes to for example goods being marketed which boost domestic production and then be marketed outside of Iran.

It will require Iran to be part of the financial grid for example. Now how the respective candidates are going to be able to do that, when we have major countries like the US, cornering Iran such as its central bank?

Izadi: Let me, before answering that question, just say a couple of sentences about the issue of having about seven hundred candidates and then disqualifying most of them.

As you know in Iran, registering to become a candidate for the presidency is free; unlike for example the United States, depending on the state, there is generally a major fee to register to become president. You have to pay some amount of money to be able to fill out the form.

In Iran, it is free and there is no restriction for people to go and register. So almost everyone that registered for the presidency, majority of the six hundred people or so who did, really did not think they are going to be a real candidate for the presidency.

Unfortunately this is a problem with [Iran’s election] law that does not have a mechanism of finding out who is a serious candidate and who is maybe mentally ill or maybe does not have anything else to do that they just come and register.

So when you watch the news of the days that people could register, you would have someone who is nineteen years old come and register to become president; someone who had a second grade education would come and want to be a president.

A lot of people who registered were not serious candidates and in Iranian election laws this is the responsibility of the Guardian Council to recognize who is a major candidate, who is fit to become president and who is not.

So all of the non-major candidates, all the candidates that you know some of the people who were really not serious about presidency, they were disqualified and then you had some people like [former] President Rafsanjani, who was almost eighty years old, disqualified; the people who were on the Guardian Council basically reached the conclusion that his age and his current situation would not permit him to become president.

This is not a very good way of disqualifying candidates. It is quite open in terms of not justifying in accurate way or in a sort of proper way; why people are disqualified and not, this is a problem with the election laws, but in all major countries that practice democracy they have a way of separating serious candidates and non-serious candidates.

Generally when [US Secretary of State John] Kerry or someone else in US government talks about Iran’s elections, they lie in terms of trying to misrepresent the political system and trying to sort of make a presentation that the political system in Iran is not a real democracy and they refer to this issue of seven hundred people participated and signed up to be president and then most of them were disqualified.

This is a lie, because they know that almost everyone that was disqualified really deserved to be disqualified, because they were not major candidates. So that is one point that I think needs to be taken care of.

With regard to the plans that these candidates presented today in the debate obviously Iran has its limitations at the moment with the banks being sanctioned, with the economic pressures and sanctions, other types of sanctions that exist, no matter who becomes president in Iran, will have difficulty fixing the economy.

I think with the new presidency, you will have new blood coming into the political system in Iran and I think the ideas that the candidates presented today are quite interesting in terms of how they are planning to fix the economy and I think whoever becomes president will have new initiatives to do that.