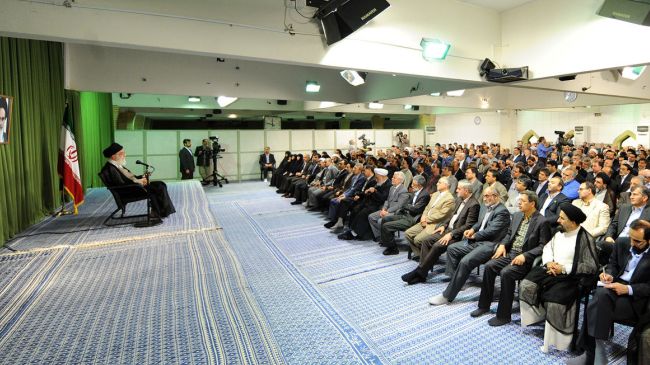 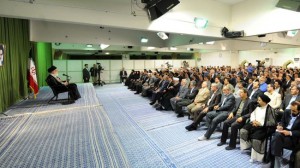 Leader of the Islamic Revolution Ayatollah Seyyed Ali Khamenei during a meeting with members of Iran’s Majlis on Wednesday, May 29, 2013

Leader of the Islamic Revolution Ayatollah Seyyed Ali Khamenei has called on all presidential candidates to be honest with people and tell the truth in their campaigns.

“The words of [presidential] candidates must be real, friendly, [and] based on accurate and true information,” Ayatollah Khamenei said in a meeting with members of Iran Majlis on Wednesday, adding, “Presidential candidates must only tell people realities, both the realities about the situation inside the country and about themselves.”

“Everybody should try for election to be held in a lively manner with public participation, because the authority and strength of the Islamic establishment since the 1979 Islamic Revolution has been based on public participation and support,” the Leader pointed out.

Ayatollah Khamenei said lively elections would ensure the immunity, strength, and security of the country and would also dispel enemy threats.

The Leader further stated that there are good and sound regulations for all stages of election in Iran and there has been no deadlock in any stage of the polls.

“So far, all stages [of the election] have been completed according to the Constitution and presidential hopefuls expressed their adherence to the law in their interviews, and exhibited this adherence [to the law] after the approved candidates were announced. We must thank all of them, especially those who were not approved [by the Guardian Council],” Ayatollah Khamenei said.

The Leader also asked the candidates to refrain from mudslinging against their rivals and distortion of the social realities in order to gather more votes.