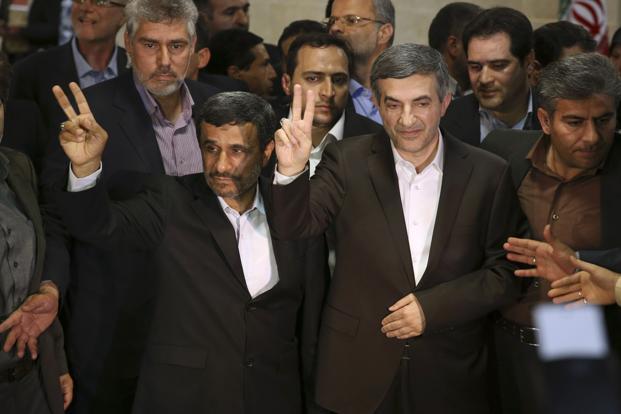 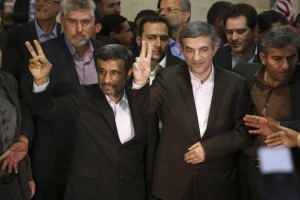 (Reuters) – President Mahmoud Ahmadinejad said on Wednesday he would ask Iran’s supreme leader to reverse a ban preventing his aide from running in next month’s presidential poll, a test of stability after the violent trauma of the 2009 vote.

Rafsanjani, a pillar of the 1979 Islamic Revolution, will not appeal against the ruling, his campaign chief said.

The elimination of Rafsanjani and Mashaie sets the stage for the election of a president from the conservative “principlist” camp which touts its loyalty to the supreme leader – and will disappoint Iranians who had hoped for a more open contest.

Their country’s economy is reeling under Western sanctions imposed over sensitive nuclear work which it has refused to curb despite Israeli and U.S. threats of military action. Iran denies accusations that it is covertly trying to build nuclear weapons.

Khamenei, the ultimate arbiter of nuclear and other affairs of state, is seen as wanting a more docile president than the turbulent Ahmadinejad. He could reinstate the two heavyweight challengers by decree, but analysts said this was unlikely.

“Khamenei surely signaled to the Guardian Council … that he did not want Rafsanjani or Mashaie to run,” said Cliff Kupchan of Eurasia Group, a political risk consultancy. “The Leader wants a pliant president and a calm election.”

Ahmadinejad’s re-election in 2009 in a vote his opponents said was rigged led to the worst popular unrest in the Islamic Republic’s history, damaging the ruling system’s legitimacy.

Rafsanjani earned hardliners’ wrath at the time for criticizing authorities’ treatment of protesters. Khamenei had endorsed Ahmadinejad’s win but has since fallen out with the populist president, who has often asserted his independence.

Eshaq Jahangiri, head of Rafsanjani’s campaign, was quoted in ISNA news agency on Wednesday as saying the veteran politician would not object to the Guardian Council’s decision.

“Mr. Hashemi Rafsanjani and his campaign as a whole entered the field on the basis of following the rule of law and morals, and will continue in this way as well,” Jahangiri said.

But Ahmadinejad, who cannot run for a third consecutive term himself, said he would challenge the ban on Mashaie, calling him a “righteous person and beneficial for the country”, ISNA said.

“In my opinion there will be no problem with the Leader and I will take up this issue until the last moment with him,” Ahmadinejad said. “I am hopeful the problem will be solved.”

Ahmadinejad has in the past threatened to reveal evidence of corruption by his rivals, though analysts said any such challenge to the ruling establishment would carry grave risks.

“The institutional leverage available to the Supreme Leader and his allies will outweigh any evidence or anything that Ahmadinejad and his team have up their sleeve,” said Yasmin Alem, a U.S.-based expert on Iran’s electoral system.

Iran’s conservative religious and military establishment, headed by Khamenei, wants no repeat of the mass protests that the security forces eventually crushed after the 2009 vote.

“In 2009 there were a lot of lessons that were drawn. All of those lessons will be applied to these elections,” Alem said.

“Anyone who raises doubt about these elections will be doing the bidding of the enemy. They’ve laid the ground for dealing with Ahmadinejad and his team.”