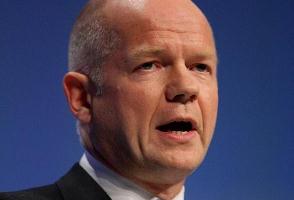 “It is very clear that Syrian regime is receiving a great deal of support, increasing support in recent months from outside Syria from Hezbollah and Iran. This is a regime that is increasingly dependent on external support,” Hague said in a news conference with his Jordanian counterpart Nasser Judeh.

“The regime is being propped up by others outside, further undermining its legitimacy. It also shows that is a crisis that is increasing the threat to regional stability.”

Speaking before a meeting of the Friends of Syria alliance in the Jordanian capital, Hague said Britain would urge international powers to set a date in the next few days for an international conference to try to end the two-year conflict engulfing Syria.

“It is important that it takes place as quickly as possible because people are dying and more and more people are driven from their homes. The risk to regional stability grow every day so this something that cannot be debated endlessly,” Hague said.

His comments echo those of an EU diplomatic source late on Friday.

“Since November the regime has been able to go on the offensive not because it is stronger, but because those backing it – Iran, Russia, Hezbollah – are directly helping it either through weapons, planning of operations or financial assistance,” the source attending the meeting in Amman said.