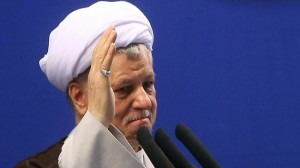 The announcement Tuesday listed eight candidates for the June 14 ballot. All are closely linked to Iran’s ruling system.

Not on the list were Ahmadinejad protege Esfandiar Rahim Mashaei and former President Akbar Hashemi Rafsanjani.

The election will pick a successor to Ahmadinejad, who cannot run again because of term limits.

Iran’s election process slipped into a tense holding pattern Tuesday amid speculation that candidates blocked from the ballot include a top aide of outgoing President Mahmoud Ahmadinejad and a former president who revived hopes of reformers.

Their potential exclusion from the June 14 presidential ballot would give establishment-friendly candidates a clear path to succeed Ahmadinejad, who has lost favor with the ruling clerics after years of power struggles. It also pushes moderate and opposition voices further to the margins as Iran’s leadership faces critical challenges such as international sanctions and talks with world powers over Tehran’s nuclear program.

The official ballot list decision by Iran’s election overseers was kept under wraps after being finalized and could be released Wednesday. The one-day delay suggested authorities allowed some time for appeals by the blackballed candidates and their backers to Supreme Leader Ayatollah Ali Khamenei, who has final say in all matters.

Several news outlets, including the state-run Press TV, carried what they called “unconfirmed” reports that two prominent but divisive figures – former President Akbar Hashemi Rafsanjani and Ahmadinejad protege Esfandiar Rahim Mashaei – did not make the cut by the Guardian Council, which vets all candidates. The reports indicated eight candidates were cleared from 686 hopefuls, some serious and many wild longshots.

The Guardian Council spokesman, Abbas Ali Kadkhodaei, told state TV that “names of qualified” candidates had been sent to the Interior Ministry but gave no other details.

Any of the choices would create a possibly seamless front between the ruling clerics and presidency after years of political turmoil under Ahmadinejad, who tried to challenge the theocracy’s vast powers to make all major decisions and set key policies. Iran’s presidency, meanwhile, is expected to convey the ruling clerics’ views on the world stage and not set its own diplomatic agenda.

While the election is not expected to bring major shifts in Iran’s position on its nuclear program – which Tehran insists is peaceful despite Western fears it could lead to atomic weapons – it could open opportunities to renew stalled talks with a six-nation group that includes the U.S.

On Tuesday, Foreign Ministry spokesman Abbas Araqchi said Iran’s nuclear stance will “not change either before or after the election.”

He has been badly tarnished by Ahmadinejad’s feuds with the ruling clerics. Hard-liners have denounced Mashaei as part of a “deviant current” that seeks to undermine the country’s Islamic system – which made ballot approval highly unlikely.

This would leave Ahmadinejad politically orphaned going into the final weeks in office. He still has significant public support and could try to bargain with other candidates or break away and start his own political movement.

Few powerful voices have come to Mashaei’s defense in a sign of Ahmadinejad’s fallen fortunes. But the case for Rafsanjani could be more complicated.

His surprise decision for a comeback bid – 16 years after leaving office – jolted hard-line foes and was cheered by beleaguered reformists and liberals after years of crackdowns.

Rafsanjani faced a barrage of attacks in the past week from powerful critics who suggested the 78-year-old does not have the stamina for the presidency and is disgraced for criticizing the heavy-handed tactics used to crush protests following Ahmadinejad’s disputed re-election in 2009.

Rafsanjani’s youngest daughter, Faezeh, was released from jail in March after serving a six-month sentence in connection with the postelection chaos. His middle son, Mahdi, also is to stand trial in coming weeks for his alleged role in the riots.

But Rafsanjani also carries a legacy with a sweeping reach.

Moderates see him as a pragmatist who can deal deftly with the West and use his skills as patriarch of a family-run business empire to help repair Iran’s economy, battered by sanctions and mismanagement. Others, even ideological foes, respect his high-profile role in the 1979 Islamic Revolution as the closest confidant of its spiritual leader, Ayatollah Ruhollah Khomeini.

In a sign of possible lobbying on Rafsanjani’s behalf, he received apparent support from some influential members of the Assembly of Experts – the only group with the power to dismiss the supreme leader. Rafsanjani was pushed out as the group’s chairman after failing to get enough support to leverage possible concessions from Khamenei on the 2009 postelection clampdowns.

One member, Ayatollah Mohieddin Haeri Shirazi, sent a letter to Khamenei saying “omitting a prominent figure from the election was incompatible” with giving wide choices to voters, the semiofficial ISNA news agency reported.

Another assembly member, Ayatollah Mohammad Vaez Mousavi, told the semiofficial ILNA news agency that Rafsanjani’s age is not a weak point and many Iranian leaders “accepted responsibilities when they were quite old.”

“The intensified defamation campaign against Rafsanjani means hard-liners are extremely afraid that he will win the vote,” said prominent political analyst Saeed Leilaz. “Discrediting Rafsanjani doesn’t work anymore. What matters today is who can save the country’s economy; who has a plan to take Iran away from isolation and improve living conditions.”