Compromise with US would bankrupt Iran economy: Basij cmdr. 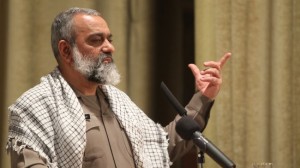 Commander of Iran Basij forces says making any compromise with the United States will bankrupt the Islamic Republic’s economy.

“Resistance or compromise [with the US] has a direct relationship with the price of oil,” said Brigadier General Mohammad-Reza Naqdi on Tuesday.

“In the event of a compromise [with the US], oil prices will drop and the administration’s oil income will be halved and it will be followed by economic problems and pressure on the government and people,” the commander noted.

He added, “The biggest lie of this year is that some say relations with the US would result in the reduction of inflation and improvement of economic conditions, because [contrary to this lie] if we [reach a] compromise, our economic situation will severely worsen,” he added.

Naqdi further said the US-led sanctions are not the only economic war waged against Iran because the West has a plan to defeat the Islamic Republic economy and prevent its emergence as a leading economy.

The Iranian commander also stated that the Islamic Republic’s increasing self-sufficiency in industry, economy, technology and science is the reason behind the West’s war against the country.

Iran rejects the allegation, maintaining that as a committed signatory to the Non-Proliferation Treaty and a member of the International Atomic Energy Agency, it has the right to use nuclear technology for peaceful purposes.