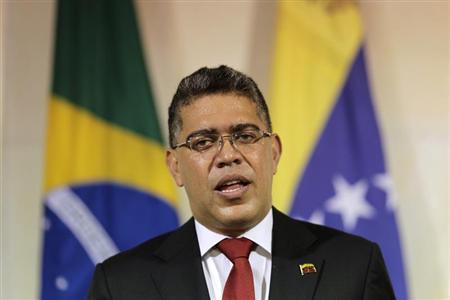 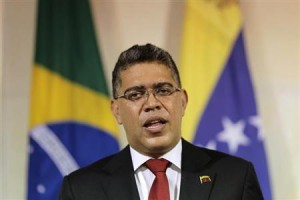 (Reuters) – Venezuela’s recent designation of an acting head of its diplomatic mission in the United States shows the OPEC nation’s desire to restore full diplomatic relations, the foreign minister said in an interview broadcast on Sunday.

Disputes between Caracas and Washington were common during the 14-year-rule of late socialist leader Hugo Chavez, leaving both nations without ambassadors in each other’s capitals.

Foreign Minister Elias Jaua suggested in a televised interview that the move to name government ally Calixto Ortega as charge d’affaires in Washington could be a prelude to restoring ambassadors.

“This is a message for U.S. politicians so they understand Venezuela’s desire to normalize relations … via the designation of the highest diplomatic authorities,” he said. “Why? Because the United States remains our top trade partner.”

Venezuelan President Nicolas Maduro has in recent months said he wants better ties with Washington as long as the relationship is respectful. But he has also accused the United States of seeking to destabilize the country.

Last month, he slammed the United States for “vulgar” meddling after the State Department said it had not decided if it would recognize his presidency and supported opposition calls for a vote recount after the April 14 election.

He won that vote, triggered by Chavez’s death, by 1.5 percentage points. The opposition refused to accept the results and is challenging the election in the country’s top court.

In 2008, Chavez expelled U.S. Ambassador Patrick Duddy from Caracas in a dispute over what the late president called Washington’s involvement in violent protests in Bolivia.

In 2010, he blocked Washington’s nomination of diplomat Larry Palmer as ambassador in protest of Palmer’s comments that there were “clear ties” between members of Chavez’s government and leftist Colombian rebels.

The State Department responded by revoking the visa of Venezuela’s ambassador.